Clint Barmes (arguably) had a couple of defensive miscues - something we haven't seen much from him lately. However, something we have seen a lot from him lately (namely, hitting with RISP) continued to rear its beautiful head tonight as Barmes had a couple of hits (including a big three-run homer) and drove in four, helping the Rockies defeat San Diego and clinch a pivotal NL West series against the Padres.

Like Ubaldo Jimenez last night, Jason Hammel was dominant for a long stretch to start the game but ran into trouble in his final inning. For Hammel, that inning was the seventh, where after the Rockies jumped out to a 4-0 lead, Jerry Hairston Jr. led off with a homer to get the Friars on the board. Then, Everth Cabrera and Aaron Cunningham hit consecutive singles to run Hammel out of the game. The Padres scratched across two more on a Tony Gwynn Jr. bloop single (off of Randy Flores) and an Adrian Gonzalez RBI ground out (on Joe Beimel's only pitch of the game), but no further damage was done (largely because of Matt Belisle's awesome strikeout of Scott Hairston) and the Rockies escaped the inning with the lead still intact. Rafael Betancourt made sure of that in the eighth inning as well, as he tossed a scoreless inning that included a strikeout and yet another base stealer thrown out by Miguel Olivo.

Also just like last night, the Rockies offense was able to come up with a couple of insurance runs when they were desperately needed. Melvin Mora and Olivo both reached base on what were basically infield singles, then Barmes knocked in Mora with a hard single to center. Despite the fact that Olivo made a baserunning no-no and got himself out between second and third, the Rox were still able to tack on one more after Ian Stewart walked and Seth Smith hit a pinch-hit RBI single.

Huston Street was brought in to close it out, and did just that by striking out Cabrera and Oscar Salazar, then getting Gwynn to fly out to end the game. Street looked very good, which is a promising sign for a bullpen that has been good but may be a bit gassed.

Hammel finished with 6 IP and allowed three runs on seven hits. He struck out four. Along with Barmes, Olivo finished with two hits. Also of note, Carlos Gonzalez homered for the second straight ball game and now leads the club with 12, and Dexter Fowler went 0-for-4 with a walk in his first game back with the big club. 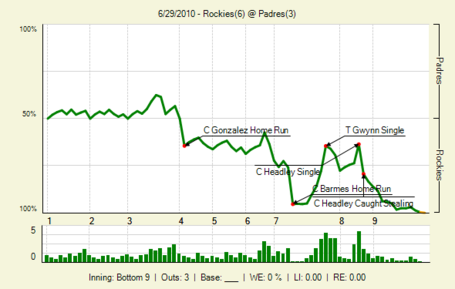