Rockies goad the Snakes once too often, finally get bit and lose 7-6.

Share All sharing options for: Rockies goad the Snakes once too often, finally get bit and lose 7-6.

Carlos Gonzalez hit his second lead-off home run against the Diamondbacks in 2010, and fourth leading off against Arizona in his Rockies career, to start the scoring for Colorado. After a Justin Upton two run shot in the bottom half of the inning off of Rockies starter Aaron Cook to put the Snakes in front, Seth Smith then hit a two run home run (his team leading ninth of the season) in the third to restore the lead to the Rockies.

The Diamondbacks tied the game again in their half of the inning after loading the bases with one out off of Cook when Mark Reynolds hit a sacrifice fly. This was the first of three bases loaded situations for the Diamondbacks in the game that sac fly was the only score they would get from any of them.

After Troy Tulowitzki reached on an error, stole second and advanced to third in the sixth inning, Miguel Olivo drew a two out walk from Diamondbacks starter Ian Kennedy which set the stage for Ian Stewart to launch a three run home run to give the Rockies a lead that would stick. A solo home run by Chris Young in the bottom half of the sixth and a triple by Stephen Drew followed by a second Reynolds sac fly in the seventh drew the Diamondbacks back within one, but Arizona couldn't capitalize on a significant bases loaded one out threat in the eighth inning to finish the comeback.

Arizona got two one out singles off of Matt Daley, followed by a walk from Randy Flores to load the bases, but Rafael Betancourt, who's had his own struggles this season, came in with a huge high leverage performance in striking out Justin Upton and Stephen Drew to erase the threat. An inning later Arizona figured out that maybe the way to score off of the Rockies was to avoid third altogether. Manny Corpas plunked Reynolds (one of four HBP's by the two teams) and allowed three straight singles, the last two (from bench players Gerardo Parra and Ryan Roberts) scoring the tying and walk-off runs from second base.

See the carnage of a bad WPA spin on the graph after the bump: 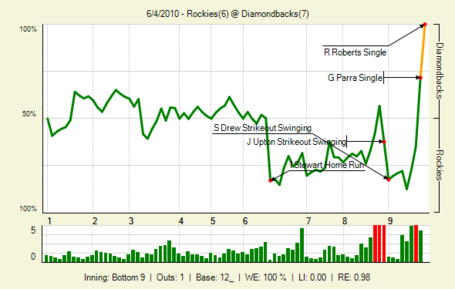