My Kingdom for a RISP hit: Diamondbacks 4, Rockies 3

Share All sharing options for: My Kingdom for a RISP hit: Diamondbacks 4, Rockies 3

It was a frustrating Saturday night for Rockies fans, as Colorado lost another close one to the cellar-dwelling Arizona Diamondbacks. This loss was notable for the Rockies' abysmal showing with RISP (0-11). So on one hand, Colorado was getting on base at a great clip. However, when so many of these opportunities present themselves and none are taken advantage of, losses become especially painful.

The Rockies sent out a B lineup against Arizona (including Ryan Spilborghs and Melvin Mora, committing heavily to platoon matchups) and got F-level results with RISP against Dontrelle Willis, who was hooked up to the Juvenation Machine tonight. Willis (1-0), who was recently acquired from Detroit in exchange for Billy Buckner, went six scoreless innings despite giving up five hits, four walks, and a hit batsman. The Rockies had multiple men on in every inning from the second to the fifth and had baserunners in the first and sixth as well -- that's nine LOB (one man was erased on a DP) for those of you keeping score at home. Willis also scored the D-Backs' first run on a Kelly Johnson single in the third.

It was a shame that the Rockies couldn't come through in high leverage situation, as Jhoulys Chacin looked fantastic until the sixth inning, when he and Randy Flores combined to give up three runs on two hits and three walks (two were IBBs). In all, Chacin (3-4) struck out nine men in 5.2 IP, allowing three earned runs on six hits and three walks.

The Rockies finally got on the board in the seventh inning, loading the bases against Carlos Rosa with nobody out on two singles and a walk, then getting consecutive sacrifice flies from Troy Tulowitzki and Brad Hawpe to make it 4-2. Another single and a walk loaded the bases for pinch-hitter Seth Smith, who was walked on four pitches by Aaron Heilman to score another run to draw within one. Alas, that was all they would get, as Ian Stewart struck out to run the Rockies' LOB total for the game to 12.

And that would be the last we heard of the Rockies' offense, which went down meekly in the eighth and ninth.

Graph: Not much of this game was played with the Rockies having the upper hand. 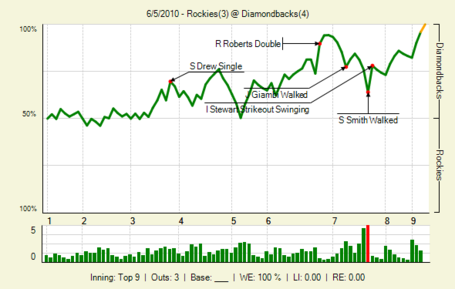