Apologies for the lateness of this recap, as well as the confusion over the game thread.

As Rox Girl posted earlier today, Ubaldo Jimenez set the Rockies' franchise record for longest scoreless inning streak at 33 innings. I haven't watched the game yet, but this seems to be another time Jim Tracy probably left U-Ball in an inning too long. A leadoff double in the eighth by Kelly Johnson preceded Conor Jackson's home run to score the two of them. Charlie summed up Tracy's decision to keep the most interesting pitcher in the world in the eighth inning with this comment. He also was hit a bit hard today, as four of his six hits allowed went for extra bases.

The top of the lineup's offense appeared today as Carlos Gonzalez, Troy Tulowitzki, and Brad Hawpe each had two hits. CarGo drove in two runs on a single in the fifth, and then Tulo hit his eighth home run of the season the following inning.

Much better to face the Astros having won the final game against the Snakes than returning home on the wrong end of a sweep. 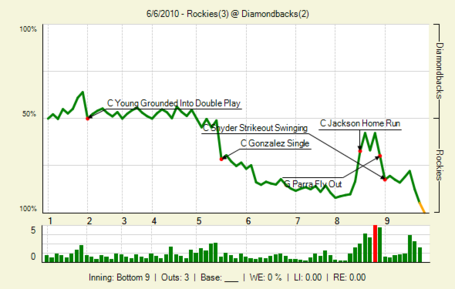