Share All sharing options for: Rockies 5, Astros 1: Jason Hammel cruises past Astros, picks up third win of the season

What's better on a night when the MLB Draft takes place and the Rockies play ball? The answer is both of those things and a Rockies win. All three things did happen tonight. Jason Hammel tossed seven and one-third innings of scoreless ball in the fast-moving contest.

Pedro Feliz was a thorn in the Rockies side again as he collected three of the Astros' nine hits. The third hit prolonged the game since it came with two outs in the ninth. The ball hit off Jonathan Herrera's glove and traveled into the outfield. Matt Daley, who started the ninth, allowed two more singles to lose the shutout for the Rockies. Manuel Corpas relieved Daley and struck out Jason Michaels. Corpas picked up his seventh because the tying run was on deck.

I'd be remiss if I didn't mention Joe Beimel inducing an inning-ending double play by Lance Berkman in the eighth.

Offensively, Clint Barmes came through with a two-run double in the second, much to the delight of Rockies fans everywhere. Miguel Olivo seems to be made of triples this season, hitting one in the eight to plate Brad Hawpe. Todd Helton immediately followed the triple with a sac fly. Hawpe drove in a run on a fielder's choice in the third. 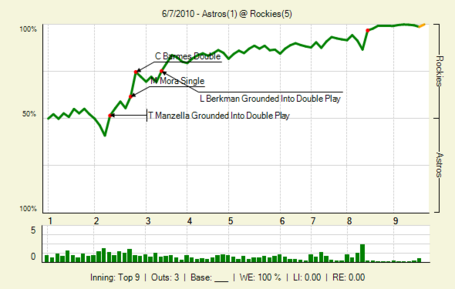