The Rockies found a way to snatch defeat out of the jaws of victory on Tuesday night, falling 4-3 to the Houston Astros despite holding a 3-1 lead after six innings, and a 3-2 lead after the seventh.

Matt Belisle had a rare rough outing, as he allowed two runs on two hits while only getting one out, which was a well-hit liner to Carlos Gonzalez. One of the hits Belisle allowed was a well-placed bunt single by Tommy Manzella, who is quickly becoming a large pain in the neck of the Rockies. That came after Belisle was called for a balk, which allowed Michael Bourn to advance to second. Belisle wasn't allowed to get out of his own jam, as Jim Tracy called upon Franklin Morales to try to get a ground ball to get out of the inning. Frankie did just that, but the Rox were unable to get Lance Berkman out at first, resulting in Bourn crossing the plate to tie the game. Tracy then played the matchup game, bringing in Rafael Betancourt to face Carlos Lee. Betancourt fell behind 2-0, then threw another ball off the plate but this time, Lee blooped it into left field to score Berkman, who had just stolen second base.

The Rockies' offense went away without much of a fight, as they didn't do much of anything at all after the first inning, let alone in the eighth and ninth innings. Troy Tulowitzki hit a two-run double to get the Rox on the board after consecutive singles by CarGo and Seth Smith. Then, Brad Hawpe singled to drive in Tulowitzki to make it 3-0 before Brian Moehler could even record an out. Then, as they say, it was all downhill from there (though Brad Hawpe did his best by nearly connecting on a home run in the bottom of the eighth, only to be robbed by Jason Michaels).

Lost in all of the offensive and bullpen failure was a nice performance by Jeff Francis, who went seven innings and allowed two runs on seven hits. He struck out just one batter, but perhaps more importantly, he didn't walk anybody and did a tremendous job of keeping the ball down, as he induced 14 groundouts to just five flyouts. The Rockies' Jekyll-and-Hyde offense was paced by Troy Tulowitzki, who went 2-for-3 with the aforementioned double and two RBIs. Brad Hawpe and Carlos Gonzalez also contributed multi-hit efforts.

Depressing win probability graph and Rowcall after the jump... 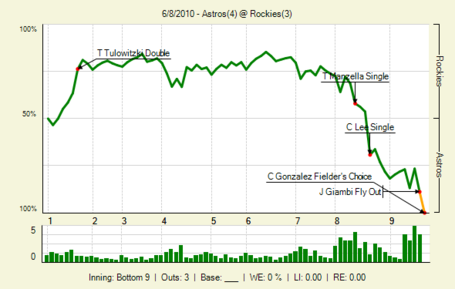