No teams above A-ball were active last night, so this would be a pretty boring pebble report, if I didn't have goodies after the jump.

The Pacific Coast League was off last night.  Esmil Rogers (1-3, 7.41) (2003, DR) was scheduled to start tonight in opening a series vs. the Salt Lake Bees (Angels), but he was called up yesterday.  Of course, that means he'll be fully rested and ready for long relief with the big club.

The Texas League All-Star game was last night.  Six Drillers were selected to play, though only four saw action for the losing North side.    Bruce Billings (2007, 30th round) started for the North and got only two outs, walking one, hitting a man and permitting two groundball singles.  Keith Weiser (2006, 3rd round) fared better and tossed a scoreless inning.  Daniel Mayora (2005, VZ) started at shortstop and went 0-for-3, while Wilin Rosario (2006, DR) singled and struck out in two at-bats.  Scott Rice (2010, MiLB FA) was promoted to AAA, and Jeff Kindel (2006, 14th round) was on the disabled list.

Christian Friedrich (0-5, 5.59) (2008, 1st round) gets the ball tonight for Tulsa against the Corpus Christi Hooks (Astros) looking for his first win.

Juan Nicasio (2006, DR) was absolutely brilliant last night, holding the Lancaster JetHawks (Astros) to just one run on three hits in eight sterling innings, striking out eight and walking just one.  That's a dominant line there.  He was so good in fact, the only run he allowed came when he picked a guy off.  With runners at the corners, he picked off Freddy Parejo from first and got him in a rundown.  Parejo stayed in the rundown long enough for Brandon Barnes to cross for Lancaster's only tally.  Nicasio is now 5-1 with a 1.46 ERA in his last seven starts.

The offense scored in five separate innings, mostly led by Ben Paulsen (2009, 3rd round), who was a single shy of the cycle.  Radames Nazario (2005, 22nd round) doubled twice and singled and Tim Wheeler (2009, 1st round) singled, walked twice and scored twice.

All the rest is under the jump.  WARNING:  Several photos and videos are presented after the jump.  If you are on a slow internet connection or on mobile, it might take a long time to load the page.

Juan Gonzalez (2007, VZ) wasn't perfect last night, but he definitely got the job done.  Despite allowing 10 hits, managing just three strikeouts and sporting a poor 6-to-8 GB/FB ratio, the right-hander held the Kannapolis Intimidators (White Sox) to just one run in seven innings.  Four of those ten hits led to the lone run in the first inning, but the scoring stopped there.  Jared Clark (2009, 12th round) had a perfect evening, walking twice in addition to his single and solo home run.  He scored the walk-off run in the ninth after his second free pass, then reached third on two errors and scored on an Orlando Sandoval (2006, DR) walk.  Nolan Arenado (2009, 2nd round) doubled for the third time in four games, but he is hitting just .171/.231/.286 his past ten games.

The Dust Devils' scored the first five runs in their game against the Salem-Keizer Volcanoes (Giants) and never looked back.   Leonardo Reyes (2006, VZ) hit a solo home run, Joshua Rutledge (2010, 3rd round) made his pro debut pushed across a run with a walk and Nathan Hines (2009, 50th round) drove in a third run in the third with a sac fly.  Russell Wilson (2010, 4th round) tripled in a run and scored on a wild pitch in the seventh and Rutledge scored in the ninth on a Chandler Laurent (2009, 21st round) sac fly after reaching on reaching on his first pro hit.

I left work early to head up to Casper and catch the game.  Unfortunately, it was a real snoozer.  Bruce Kern (2010, 23rd round) pitched very well over four innings, allowing one run in the first inning on five slow ground balls (two found holes).  After the Ghosts took the lead in the bottom of the sixth using a single, an error, three walks, two wild pitches and a passed ball (Welcome to Rookie Ball!), Christian Bergman (2010, 24th round) earned the loss in his professional debut. The game-tying runner reached base on a strike out, then Bergman allowed two singles and a bunt for the lead to change hands.

Offensively, Ryan Casteel (2010, 17th round), Juan Crousset (2007, DR) and each Robert de la Cruz (DR) singled twice.  The Ghosts failed to tally a single extra base hit as a team.  They failed to score a run off Idaho Falls starter Starling de la Rosa, who I think weighs about 120 pounds.

I know several Rowbots have expressed interest in Corey Dickerson (2010, 8th round), so I focused on him.  Unfortunately, he went 0-for-3 and played DH, so there's not a whole lot to pass along.  First of all, this is what he looks like (and yes, that is him as the main story photo too): 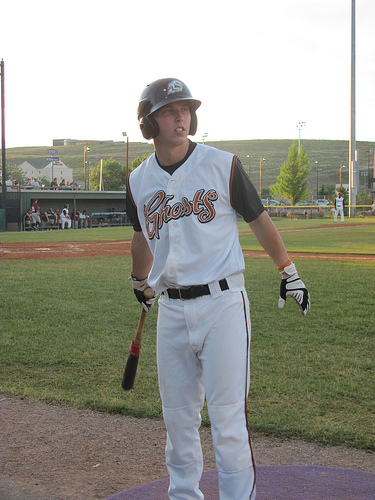 My first impression last week was the surprising severity of his crouch, feet widespread and weight on the back foot.  I got a seat directly behind the Ghosts on-deck circle this time, so I got a closer look.  In his first at bat, he didn't seem to be crouching much.  I chalked it up to poor memory or eyesight.  But then I looked closer: 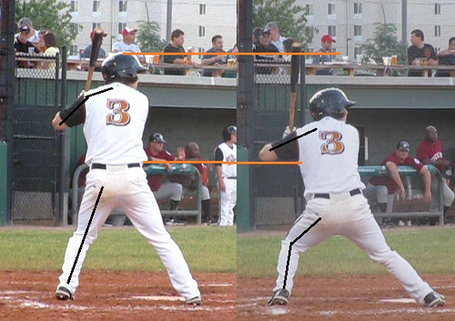 Yeah.  It is obvious his stance is not consistent, and it isn't even close.  These stills were taken from the same location in the same at-bat....with the same count.    I have multiple shots from various at-bats, and it varies quite a bit.  Obviously, it hasn't hurt him much in the Pioneer League, where he has posted a .417/.488/.778 line, but having a consistent stance and eye level when moving to the ball will have to happen for success to be had at upper levels.  Dickerson isn't alone at this.  Last week, Anthony Aguilera (2009, undrafted FA) had five distinct different strides with his lead foot when swinging at the ball.  In the same at-bat.

Here are the videos of both pitches still-framed above.  He has three home runs this year, two more than any other Ghost, but this was as exciting as it got last night with him.

I probably don't need to point this out, but even without the crouch, he really swings hard. 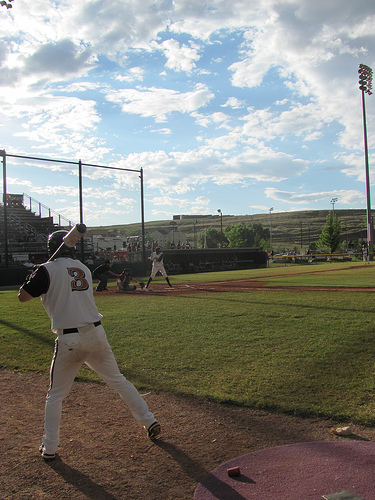 Dickerson on deck with Cristhian Adames (DR) at the plate. 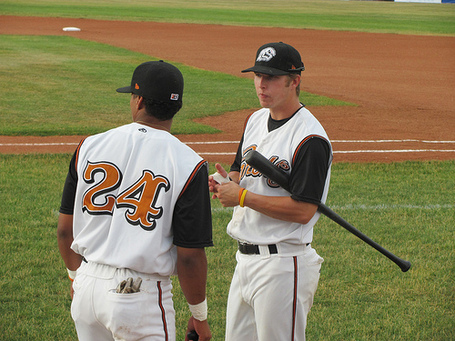 And to get off Dickerson a bit: 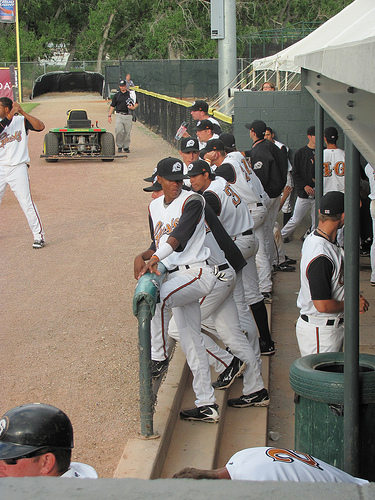 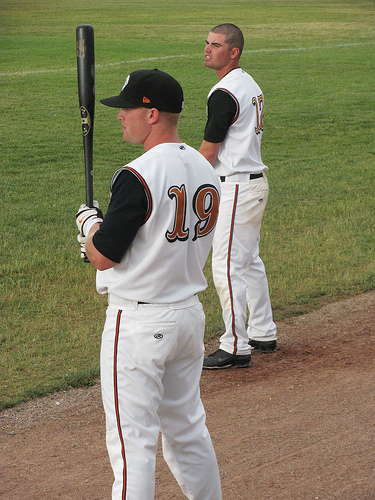 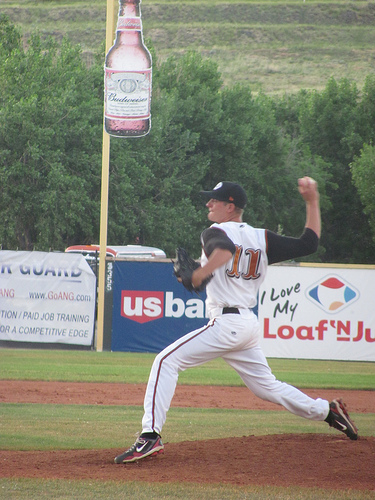 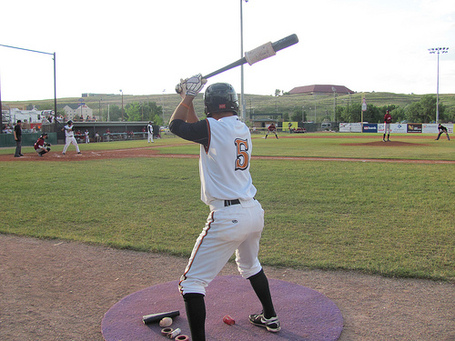 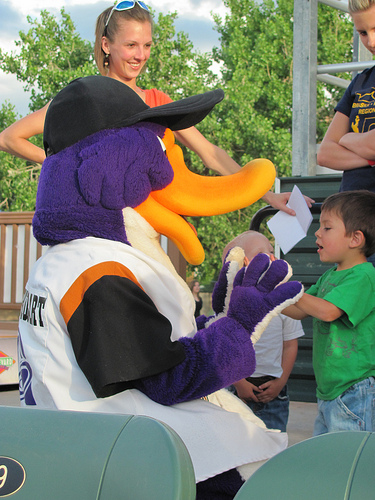 We have a purple dinosaur, so why not a purple platypus?  What's more:  it turns out players aren't the only ones at the game trying to imitate the pros at Coors Field.  When Casper was leading late in the game last week, Hobart the Platypus stood behind home plate waving his...fins? hands? paws?...and clapping.