Share All sharing options for: Offense heats up for Cook and the Rockies in 7-3 win over Giants

Mmm... there's nothing like the smell of victory coming from the kitchen. And what's this, do I sense a pleasant wisp of tacos on the air as well? I do!  Oh.., oh.., and what else is that, it's so intoxicating, like as if you were able to smell the tears of so many San Franciscans longing for something they simply are incapable of having. Ever. Whatever it is, it smells delicious, and I wouldn't mind experiencing it again all weekend.

Aaron Cook pitched into the seventh, allowing three runs but was generally effective in picking up his third win. Carlos Gonzalez started the offense with a two run blast, his thirteenth home run of the season, and scored twice, and Dexter Fowler proved to be a lead-off spark with three hits, including a triple, two stolen bases and two runs scored. Miguel Olivo and Clint Barmes each contributed the type of clutch hitting they've been getting good at thus far this season with two hits apiece and a combined three runs and two RBI,  and Jason Giambi added a pinch hit exclamation mark to the evening by driving in the Rockies last run.

With the seven to three win, the Rockies are now:

With the win and the Padres currently losing, the Rockies appear to be moving back to within four games of San Diego in the NL West and are now within two games of the NL Wild Card spot. The Giants, meanwhile have lost six straight and have fallen a game and a half behind the Rockies in the division.

Other news around the division: Arizona has shaken up it's front office and bench management this evening as both the general manager Josh Byrnes and field manager A.J. Hinch are being let go, and the Orioles have called up third base prospect Josh Bell, who the Dodgers traded for George Sherrill last summer. Quick WAR comparison with their most recent clubs of Rafael Betancourt (who cost the Rockies Connor Graham last summer) and Sherrill:

I do that because it's fun to laugh at the Dodgers when they mess up. 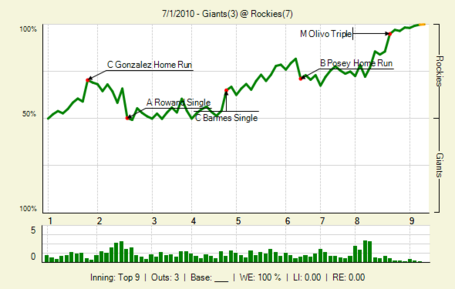