Sorry this is a little late, as I was attending the game tonight (RF upper deck).

Prodigious power and Hammel Time were the themes of the night for the Rockies, who scored all of their runs via the long ball in front of a weekend crowd of over 45,000 fans.

Melvin Mora got Colorado off to a good start with a solo shot (his first of the year) to lead off the second, then Carlos Gonzalez went oppo in the third (his 17th) to make the cushion 2-0 Rockies. Finally, Big Bad Brad Eldred whacked his first home run in a Rockies uniform (and his first in MLB since 2007 with the Pirates), a two-run shot in the sixth, to give Colorado a four-run lead. And that was all they would need.

Jason Hammel (7-3, 4.08) got the win, pitching 6.1 innings and striking out four. Hammel retired the first twelve men he faced before running into a little trouble in the fifth inning, loading the bases with one out on two hits and a walk. However, a line-out to first and a punchout (one of four on the night) ended the threat. The lanky right-hander finally let the Padres score in the seventh, but San Diego's two runs in the inning would be all they could muster, as a combination of Matt Belisle, Joe Beimel, and Huston Street shut the door. Street recorded his fifth save of the year.

Hammel is 6-0 with a 2.17 ERA in his last nine starts after a nightmarish start to the season.

The win was the Rockies' sixth straight, their ninth of ten, and their eleventh of thirteen. In other words, they have been nuclear over the last two weeks. The streak has landed Colorado within a game of the division lead (they are currently leading the NL Wild Card standings as well). With a victory tomorrow the Rockies would head into the All-Star break with a share of the division lead and 50 wins (the best record at this point in team history). This augers well for the stretch run, as the Rockies are getting healthy (and hot offensively).

Catch you after the jump...

As the graph shows, the Padres never had a chance: 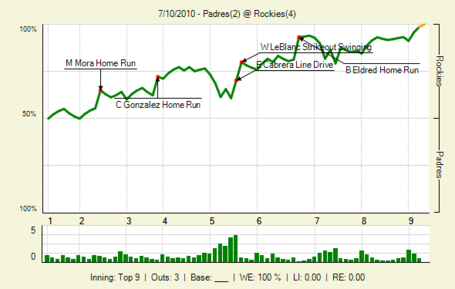