For six innings, it looked like any other Rockies win.  For the fifth time this week, Colorado came from three runs behind, turning a 3-0 deficit into a 6-3 lead.  It had the comeback, the good base-running, good defense, timely hits.  Unfortunately, the bullpen couldn't hold on, helped along by the complete butchering of the most routine defensive throw in baseball.

SEVENTH INNING RATING:  Okay, that's just annoying.  After a solid single and bloop single, Jim Tracy decided to go to Randy Flores to face a switch-hitter, Chase Headley.  Headley turned on the first pitch he saw for a double, cutting the Rockies' lead to one.

NINTH INNING RATING:  You can't be SERIOUS?!.  Everth Cabrera hit a two run home run on a pitch at his shoulders.  Enough said there.

Despite the fact that San Diego had 16 hits, the Padres didn't win this game as much as the Rockies lost it.  At least eight of those 16 hits were of the classic BABIP variety.  Seriously, in all my years of watching Rockies baseball at Coors Field, I have never witnessed so many broken bat/bloop/soft line drive singles in one game.  On both sides.

Jeff Francis left with a 3-0 deficit after fighting through some bloop hits and very solid fundamental play by the Padres.

Unphased, the Rockies blooped their way back into the game (LOLHUMIDORSRSLY).  A walk, a bloop triple (I'm not joking) from Herrera and a solid single from Carlos Gonzalez brought the Rockies within 3-2 in the fourth.  The tying tally came with a pinch-hit double from Brad Hawpe in the fifth.  The Rockies scored three more in the sixth on a solid single from Miguel Olivo and soft line drives from Clint Barmes and Jhoulys Chacin.

Look, this was a frustrating game to lose.  The Rockies had the Padres right where they wanted them most of the game.  The division lead was in our grasp.

But we just finished an 8-2 on the homestand, and we are 10-3 in our past 13 games.  We are ten games over .500.  As wonderful as it would have been to be leading the division at the break, it doesn't mean anything in October.  Make no mistake - the Rockies have made a statement in the last two weeks, and the Padres will be looking in the mirror. 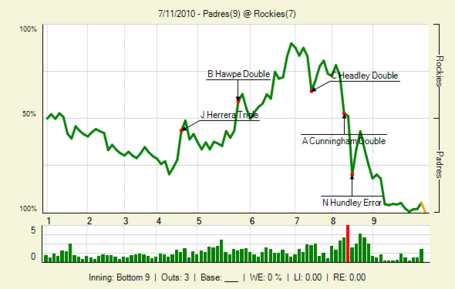