National League 3, American League 1: McCann delivers in the clutch to end the streak

Share All sharing options for: National League 3, American League 1: McCann delivers in the clutch to end the streak

The streak is finally over.

For the first time since 1996, the National League walked away from the All-Star Game victorious, beating the American League 3-1 and securing home field advantage in the 2010 World Series in the process.

The Braves' Brian McCann took home MVP honors by delivering a two-out, bases-clearing double in the top of the 7th that put the NL on the board and also gave them the lead which they would not relinquish. The senior circuit loaded the bases on consecutive singles by the Reds' Scott Rolen and the Cardinals' Matt Holliday, then a two-out walk by Marlon Byrd of the Cubs. That set the stage for McCann, who promptly smoked an 0-1 pitch from Matt Thornton of the White Sox down the right field line to score everybody.

Our very own Ubaldo Jimenez fared well in his first All-Star Game apperance, as the NL's starter overcame slight command issues to toss two scoreless frames. He walked the Yankees' Derek Jeter and gave up a bloop single to Miguel Cabrera of the Tigers in the first, but got the Rangers' Josh Hamilton to hit a comebacker which Jimenez turned into a double play. In the second inning, Ubaldo struck out the Rangers' Vladimir Guerrero on four pitches. After allowing a hard-hit double to the Rays' Evan Longoria, he proceeded to get  the Twins' Joe Mauer to fly out to center and Robinson Cano of the Yankees to ground out second - the latter of which would end Jimenez's night.

The Nationals' Matt Capps got the victory after striking out David Ortiz of the Red Sox to end the sixth. The Yankees' Phil Hughes took the loss as he was responsible for Matt Holliday, who scored the go-ahead run on the big hit by McCann. Jonathan Broxton of the Dodgers earned the save, largely because of Marlon Byrd alertly forcing Ortiz out at second base after the Blue Jays' John Buck appeared to hit a bloop single to right field. Ortiz didn't get a great read on the ball, and obviously didn't have the speed to make up for it. I guess the AL could have used an Omar Infante-type, after all. 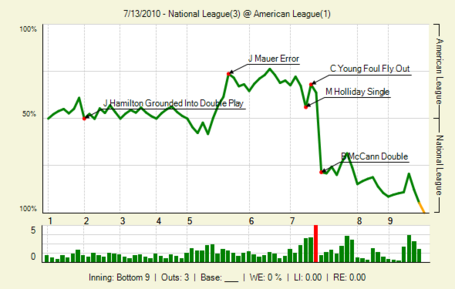 Thanks to A-Mart for posting the overflow (which I didn't think was going to be needed - you guys are awesome!)...I watched the game at a friend's house and he ended up not having proper internet access.