Well, the less said about this one, the better.

A Latin pitcher recently returned from the DL pitched his team to victory tonight. Unfortunately for Colorado, it was Edinson Volquez who looked sharp in his return from injury/drug suspension. Volquez (1-0) only allowed a first-inning Carlos Gonzalez RBI single in his six innings of work, striking out nine Rockies.

Meanwhile, his counterpart Jorge De La Rosa (3-2) was roughed up for seven runs in 3.1 IP, including a worrisome five walks and three home runs allowed. The Reds only had five hits on the night, but four of them left the yard (two by Drew Stubbs). On the bright side, other than a solo shot allowed to Johnny Gomes in the fifth inning, Jhoulys Chacin and company were very good in limiting the damage from there. The offense didn't have another monumental comeback in them this night, however, and so the Rockies lost their third straight.

Of great interest to me was the sight of Brad Hawpe playing his college position of first base for the first time in MLB, and doing it pretty well. Hawpe playing first base minimizes the impact of his "glove" elsewhere, to the point where he could really be an asset for the Rockies going forward, so I am excited about that.

With San Diego about to close out their game tonight against the Diamondbacks, it appears that the Rockies will be four games back in the NL West. Never fear, this is only delaying the inevitable Padres. We will get you. One day. 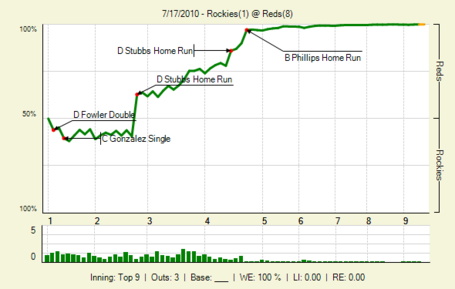