Share All sharing options for: Monday Rockpile: Jorge Cantu is not versatile

Recent trade rumors and beat sheets have the Rockies linked to Florida Marlins 3B Jorge Cantu. I really wish they didn't.

Let's look at the pros and cons.

Jorge Cantu likely will be inexpensive for trade as far as return in prospects go. That's a good thing, I can't imagine him drawing more than a B-lister or two.

Jorge Cantu is slightly better at hitting LHP than he is at hitting RHP. Also, he is posting a .203 ISO v LHP. That's some decent "pop".

Jorge Cantu is taller than Melvin Mora. This suggests he'd be a better receiver at 1B, I suppose.

Jorge Cantu is a gap hitter.

While Cantu can play 1B and 3B, he's pretty awful at both. This does not equate to versatility. This equates to fantasy eligibility.

Cantu is being paid $6M this season. Add $1.8M to that and you have Dan Uggla's salary. Not that drastic of a difference.

While I guess that Florida plays toward pitchers, Cantu hasn't posted an OPS above .800 since 2008.

Considering that Cantu will be starting at 1B or 3B v LHP to alleviate handedness splits, the swing from RHP to LHP isn't really that drastic.

Also, since when does poor defensive play at multiple positions insinuate "versatility"?

More past the jump.

So here's the deal. Cantu will provide right-handed Pop to the lineup. Problem with that is that he hasn't really hit for enough power to really sell me on that Pop since 2008 either. I get that he can do it v LHP, I'm just not that blown away. Basically, Cantu really hasn't been all that great since 2008. Not a fan.

What makes it worse that we're linked to him is that he's a right-handed corner-infield backup who can't really field well and is generally unimpressive. 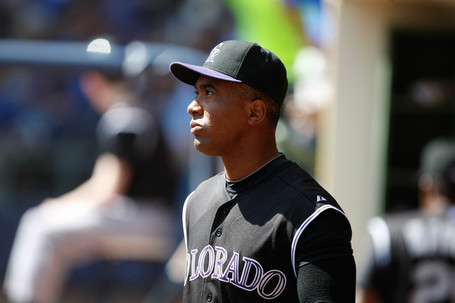 I'm not interested in giving up ANY prospect depth to pick up a guy like Jorge Cantu considering that he's pretty much redundant to Melvin Mora and the step up from Cantu to Mora isn't so night-and-day that it's a no-brainer to make the move. If we're going to make a move of this nature, why don't we just go after someone who is a legitimate upgrade?

Tulo is with the team in Florida, but he might be jumping to leave on a rehab assignment. Helton's bat speed is showing signs of life. When Anibal Sanchez and Ubaldo Jimenez square off in Florida, boy, won't that be awkward for Miguel Olivo? It'd be like having dinner with your girlfriend and ex at the same time.

Sucks that it ended, but yaaay for Johnny!

Series preview notes. You can read more of this kind of stuff in Know Your Foe, but it's always fun to see what the beat has to say about it.