Dext Message: ALL YOUR LINCECUMS BELONG TO US, Rockies win over Giants again

Share All sharing options for: Dext Message: ALL YOUR LINCECUMS BELONG TO US, Rockies win over Giants again

Dexter Fowler. Where were you, at least this left handed hitting part of you, at the start of the year? A night after collecting three hits batting right handed off of Madison Bumgarner, Fowler showed he can be just as valuable from the left side, going three for three with two walks against Tim Lincecum and the Giants in a six to three Rockies victory.

While Fowler finished with just one run scored and one RBI, his pestering presence helped chase Lincecum from the game early. Clint Barmes also came through again, scoring twice and driving in two runs with a second inning home run. Jonathan Herrera had two hits and three RBI and Ian Stewart scored twice as the Rockies got fairly balanced production throughout the lineup save for the one guy in the third slot who's been otherwise reliable of late, Carlos Gonzalez, who went zero for five.

Jhoulys Chacin had some early trouble with his fastball, allowing sharp contact, including a two run home run to Aubrey Huff in the first inning, but settled down for five more solid innings save for another Huff homer, this one a solo shot, in the sixth. The Rockies bullpen, which has been noted as one of the best in baseball, showed why with Matt Belisle, Joe Beimel and Huston Street allowing zero baserunners after taking over from Chacin in the seventh inning.

The Rockies kept pace with the pack that's ahead of them as far as the wild card, with every non NL West team holding a better record than the Rox winning tonight. Within the division, it looks good so far in Arizona with respect to the Dodgers, as they are losing, while it's too early to say what's going to happen in San Diego.

For the Giants, the loss puts them in danger of a pre-All Star break free fall (given they've lost seven straight, it seems to already be happening) that could push them out of competition for the playoffs early. As is, a seven game losing streak this deep into the season is a very bad sign for a team considering itself a contender. 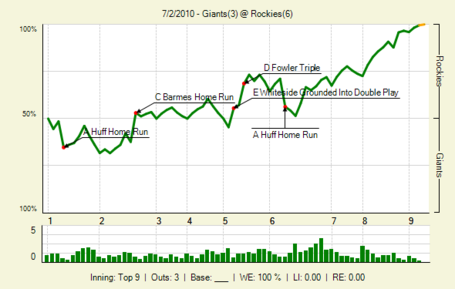