Rockies snatch another defeat from jaws of victory as Marlins swim off with 3-2 win.

Share All sharing options for: Rockies snatch another defeat from jaws of victory as Marlins swim off with 3-2 win.

Is this karmic payback for the sometimes miraculous pre-All Star break homestand? Anyway, the mopiness this 2-5 road trip engenders leaves a bitter taste in my mouth, so I'll start with some positives from today's 3-2 loss by the Colorado Rockies to the Florida Marlins:

I should also add on that note, and sorry for getting away from the positives, but the Rockies have also had the MLB's highest K rate since the start of the road trip. That above mentioned contact will never find space to land if it's never made in the first place. Today, Rockies hitters struck out 15 more times, and I realize that part of that's a hat tip to the opposing pitchers we've faced, but another big part is a bad contact team. If the Rockies do decide to add a bat at the trade deadline, please let it be somebody that can use it as more than a fan.

Ugh, at least the Padres are losing. On to Philadelphia, where the Rockies start a four game set against Roy Halladay and the Phillies tomorrow. 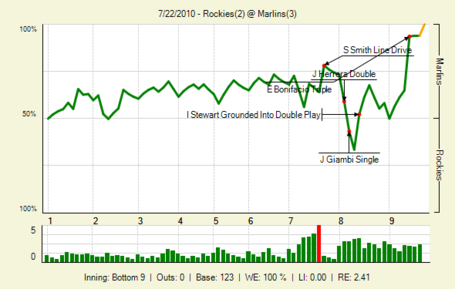