This Doc ain't got no cure, Rockies shutout by Halladay and Phillies as road woes continue

Share All sharing options for: This Doc ain't got no cure, Rockies shutout by Halladay and Phillies as road woes continue

The Rockies six to nothing loss to Roy Halladay and the Phillies on Friday night falls into two categories in my book, unfortunately, the categories are sort of contradictory:

I guess in short, the Rockies mettle has been tested the last two days and came up lacking, but I don't know if we can read much into that yet just because Halladay and Johnson are at such a high skill level, any team could be lacking facing them in back to back starts. The Rockies did continue a sky high strikeout rate they've had since the break, adding nine more to Halladay's season totals tonight while collecting just five hits. Players that looked particularly lost at the plate tonight were Dexter Fowler and Miguel Olivo.

Aaron Cook didn't have command, and he skirted around trouble frequently in the first four innings before finally getting whalloped for five runs in the fifth, with a two run Ross Gload home run putting an exclamation point on the disastrous inning. Jhoulys Chacin relieved him and pitched fairly well, but the Phillies tacked on one more run in the eighth inning to get the final result.

The nightmare road trip, on which the Rockies are now 2-6, is approaching the end, and we've finally gotten past the most difficult aspects of it as the Phillies pitchers for the next three nights aren't quite the same caliber of the pitchers we've been getting for most of the other eight games. The Rockies really need to take two of the three to save some face heading into what will hopefully be an easier stretch of the schedule.

If the Rockies want to return to the playoffs, that second point above needs to change from the current trend. Eventually the Rockies will have to beat a few top of the league pitchers to get back to October, it's too bad that it didn't happen tonight. 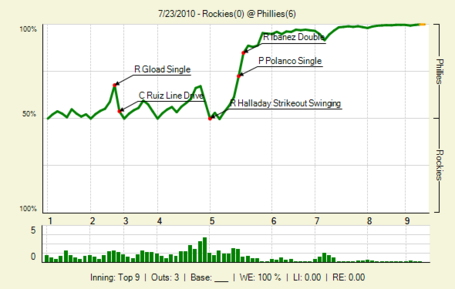