Phillies 4, Rockies 3: RISP Hitting Is Not Spelled With a K

Share All sharing options for: Phillies 4, Rockies 3: RISP Hitting Is Not Spelled With a K

The frustrating road trip from hell has no mercy.  The Rockies cannot even get help from Mother Nature.

A rain delay at the end of the sixth inning found the Rockies in the lead 3-2, but the long rain delay was not long enough, and the ensuing seventh inning proved to be a microcosm of the Rockies atrocious vacation from Coors and winning.

Dexter Fowler and Jonathan Herrera singled to lead off the inning, but Carlos Gonzalez struck out with two runners on.  After Melvin Mora was hit by a pitch to load the bases, Ryan Spilborghs stuck out and Ian Stewart flew out, one batter two later.

In the bottom of the inning, Ben Francisco blooped a double.  Jimmy Rollins found second life after Melvin Mora proved to be too short to catch a foul ball in the stands and singled to tie the game.  Rollins would later score on a wild pitch for the winning margin.

In the ninth inning, Brad Lidge did all he could to blow the save.  He threw 30 pitches in all, 15 for strikes, and even some of those were questionable.  Two Rockies walked around a Mora single, but Carlos Gonzalez (1) and Ian Stewart (3) both stranded runners with strikeouts as Lidge struck out the side in the ninth.

Are we sensing a theme?  The Rockies stranded 12 runners on the day, going 1-for-9 with RISP, and that hit did not result in a run.  Five of the 7 RISP outs by Rockies position players ended in a strikeout.  You are not giving yourself a chance with performances like that.

On the bright side, Ryan Spilborghs doubled and homered before his two ill-timed RISP strikeouts.  Jeff Francis pitched very well, striking out six and walked one in five innings, maneuvering through traffic to allow just two runs.  Manuel Corpas had a solid inning.

That's all for now.   I'm going to read about Dan Haren now. 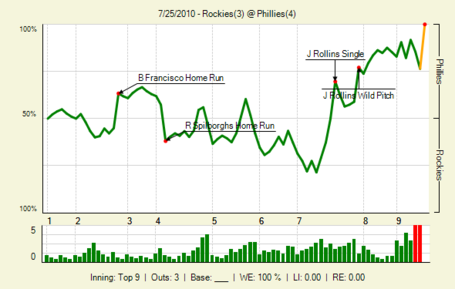