Ubaldo and bats wake up for a day. Rockies defeat Pirates 9-3

Share All sharing options for: Ubaldo and bats wake up for a day. Rockies defeat Pirates 9-3

Alright, so now it's time to start taking this season a little more seriously. Thank God, these first four exhibition months were a little excruciating in their tedium, don't you think? Glad we're starting to count them.

I was bored before now, were you bored? All this ho-hum three or four game deficit, stuff, what's the challenge in that? I mean, the Padres, right? No, this is what I'm talking about, a nice healthy challenge. Something that when you win at the end, people know you mean serious business, because OMG, you just came back from nine freaking games down in two months.

"Oh hey, Braves, I see you're in the playoffs, how'd you get here?"

"Oh we just won 94 games and the NL East, how about you, Rockies?

"Braves? Braves? You still there?"

"Sorry, I've got to excuse myself, I think I've had a bit of an accident in my pants."

Ubaldo improved to 16-2, and he's deserved every one of those wins, FanGraphs monkeys. He struck out six, walked three and allowed four hits and a run in seven innings today. Dexter Fowler, yeah him, you Purple Row "Player" haters, had three hits. Miguel Olivo, Clint Barmes, Melvin Mora and Carlos Gonzalez each had two. Ian Stewart was the only Rockies starter (including Jimenez) without a hit, but he walked twice batting in front of the pitcher.

Gonzalez (19) and Brad Hawpe (7) both homered, as trade rumors swirl about the latter after the Rockies recent "troubles," which we at shiny happy Purple Row don't like talking about. 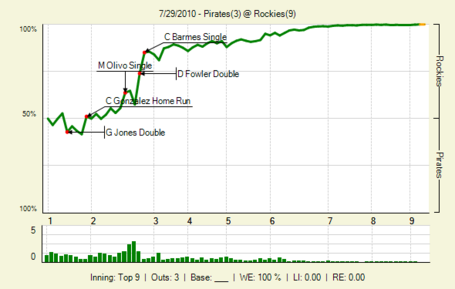