2.27: Ubaldo Jimenez's ERA after he completed six innings. Well, that's what happens when seven runs are charged to you in one inning. Wow, that third inning was . . . I lack a word to fully describe it, but Travis Ishikawa hitting a grand slam was almost a stab to the heart. If you're going to hit a grand slam, it might as well be off one of the best pitchers in the game this season.

However, the Rockies didn't stop competing and they mounted a comeback against Barry Zito, who wound up with six earned runs in 5 1/3 innings. Carlos Gonzalez started things with a two-run homer in the third, and Ian Stewart followed in the next inning with an RBI triple (but then left later in the game with an elbow injury). The Rockies really took it to the Giants in the sixth when they combined to score four runs off of Barry Zito, Dan Runzler, and Denny Bautista. Brad Hawpe doubled in a run, Dexter Fowler knocked in two on a single, and Carlos Gonzalez hit a sac fly to put the Rockies up 8-7.

Things looked good during the bottom of the eighth when Carlos Gonzalez came to the plate with two men on, though two out already. OH MAN, HE SMOKED THAT ONE!!!! Oh, right into Uribe's waiting glove. Well, let's just get through the next half inning without allowing any more ru--what, Randy Flores allowed an Aubrey Huff two-run homer. GAH! 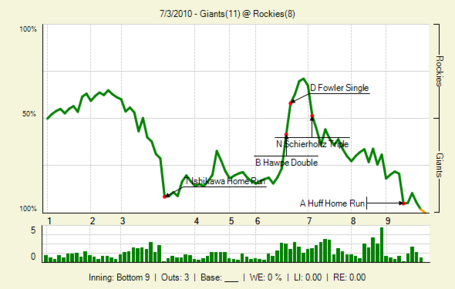 Could be worse. Did you check out the graph to the Dodgers-D'Backs game? The flat-lined quickly