Share All sharing options for: Crazy eighth: 12 runs with two outs, 13 hits in inning; Jeff Francis back in form as Rockies romp

A game that looked on its way to a decent 5-2 Rockies victory turned into a 17-2 slaughter as a couple of young members of the Cubs bullpen sort of blew up at Coors Field on Friday night.

Jeff Francis pitched six innings and continued a recent stretch of fairly strong outings from the left hander, allowing two runs on four hits and a walk, he was helped by some solid defense from his teammates, but also helped himself by striking out five and walking just one. He even collected a hit and scored the Rockies first run on a two run Seth Smith double in the third inning.

At the start of the game, the Rockies used a patient approach at the plate to get to Cubs starter Ryan Dempster, collecting five walks in four plus innings, all of which would prove integral to a run. In the third after Smith's double and a Carlos Gonzalez strikeout, three straight walks to Troy Tulowitzki, Brad Hawpe and Chris Iannetta plated Smith for the third Rockies run. In the fifth, two more walks for Hawpe and Iannetta after a Tulowitzki single loaded the bases for Ian Stewart, who knocked a single for the Rockies fifth run. CarGo led off that inning with his 20th home run of the season, Gonzalez also doubled early in the game and added an eighth inning insurance RBI single with two outs just to make sure the win was all secure at 6-2.

Maybe just a little more was needed, Tulowitzki came through with a double, scoring Melvin Mora. 7-2. Now it was probably safe...

Barmes? Didn't you already double this inning to lead off? Another single? Okay. So you can have two hits. Sure. That's fine, but no more... eh... you too Mora, a double 13-2, but I swear, that's all okay, or you'll spoil your suppers...

DEXTER FOWLER, DID YOU NOT JUST HEAR ME? WE WANT SOME OF THESE RUNS FOR TOMORROW! 15-2 AFTER YOUR HOMERUN. Now see that? You've made all the Cubbie fans cry...

That said, though, the bullpen was outstanding, Matt Belisle, Raphael Betancourt and Taylor Buchholz allowed just one baserunner (Buchholz, in what became mop-up duty) and struck out six in three innings of work.\

The Rockies were outscored 43-18 on their recent eight game losing streak, but have outscored opponents 26-5 the past two days. 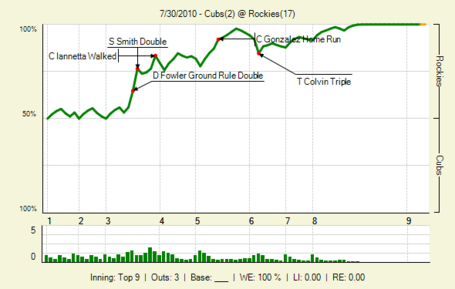