It was the 29th HR to go into the third deck, estimated distance 462 feet. That's some kind of exclamation point cha-ching

CarGo's cycle is the sixth in team history.

Let's not forget that Melvin Mora also went 4-for-4, and Miguel Olivo hit a three-run homer in the second inning. Jason Hammel cruised through the game until he started the eighth inning. Hammel allowed two singles and struck out Kosuke Fukudome before Rafael Betancourt entered the game. Betancourt then served up a gopher ball to Derek Lee to tie the game.

Boy, I'm glad this team decided to roll over and die for the next two months. 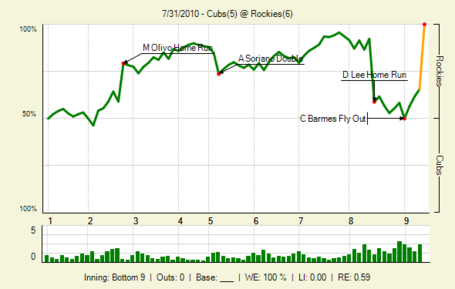