Good lord.  If the Rockies managed to lose this game, it would have hurt for a long time.

Thankfully, Dexter Fowler (who has been back in the big leagues for less than a week) and Todd Helton rescued the Rockies in the 15th inning, the longest game of the season by time and number of innings.  After failing twice to drive in the winning run in extra innings, Helton lifted a deep fly ball to left with the bases loaded to drive in Fowler, who had launched a 420 foot triple off the left-center field wall to start the inning.

It was the seventh time Fowler managed to reached base in the game, completing a historically studly line: two triples, one single, and four walks.  He scored three of the Rockies four runs and has scored in five straight games.  Though almost all of the damage has happened at Coors Field, he is sporting a ridiculous .417/.576/.792 line (that's a .559 wOBA) since returning last Tuesday. He was hitting .216/.327/.317 at the time of his demotion.

The Rockies stranded a club record 18 baserunners, 10 in extra innings alone.  They loaded the bases in the 10th, 13th and 14th and had two men on in the 11th before finally busting through in the 15th....with the bases loaded.

The storyline early was Jason Hammel vs. Matt Cain.  Hammel was as dominant as we have seen all year, throwing 7.0 sprakling scoreless innings.  He started the season 0-2 with a 9.16 ERA as the Rockies lost all four of his April starts.  Hammel then landed on the disabled list, and since then, he has been on fire.  Since his return from the DL May 15, he is 6-1 with a 2.76 ERA and the Rockies have won 8 of his 10 starts.  He has held opponents scoreless in 43.1 out of 46.1 innings since June 1.   He has been SOLID.  Unfortunately, Jim Tracy sent Hammel out with 105 pitches in the eighth inning, and it didn't end well.

Guarding a 3-0 lead, Hammel surrendered two somewhat fluky solo home runs (one inside the park) to lead off the eighth.  He finished the day having allowed 7.0 IP, eight strikeouts and just one walk, plus the two runs.  Chris Iannetta and Melvin Mora miscommunicated on an Aubrey Huff foul popup in the eighth (read: Mora called off Iannetta, then failed to catch the ball).  Huff then struck out swinging, though his swing was ruled a foul ball. He would later walk against Joe Beimel, scoring on consecutive seeing eye singles to tie the game.  That 3-3 score stood for seven more innings.

Continuing the theme of players with horrendous starts to the season beginning to blossom, Chris Iannetta walked three times, singled and homered.  After being demoted with a .133/.235/.333 line in April, he has quietly been extremely productive, producing a .261/.393/.456 line since his callup May 26, good for a solid .378 wOBA.

Esmil Rogers made his first appearance since being called up last week and was an outright hero.  While the Rockies were flailing with runners in scoring position, Rogers kept the Giants completely at-bay.  He tossed four shutout innings, striking out five, walking one (intentionally) and striking out five.  The Giants' only threat against him came on a leadoff triple by Aubrey Huff, misplayed by Seth Smith, but Rogers struck out two and induced a groundball.

what the hell did they do to Dex in CS??? 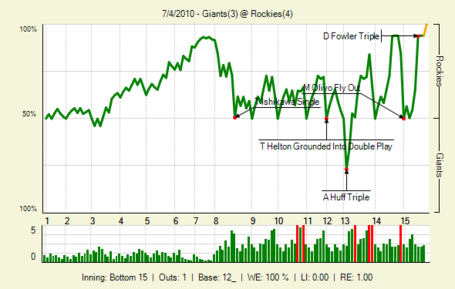