Smith and Chris Iannetta each hit ninth inning three-run homers to propel the Rockies over St. Louis in incredible fashion to open their three-game series at Coors Field. Smith's walk-off homer allowed him to join Jason Giambi and Miguel Olivo as Rockies who had three hits on the night. In addition, Carlos Gonzalez went 4-for-6 with a two-run homer, his 15th of the season. Iannetta, who entered the game as a pinch hitter and stayed in to play third base for just the second time in his big league career, drove in four runs as he hit into a run-scoring fielder's choice in the seventh inning before the big blast in the ninth.

The guys who hit the big flies in the final frame aren't the only ones who deserve credit for what transpired in the inning. Miguel Olivo led off the inning with a single. Then, after Seth Smith lined out hard to Albert Pujols, Melvin Mora hit in the pitcher's spot and singled Olivo to third. Iannetta's homer followed, and Dexter Fowler immediately doubled to keep the rally rolling. Brad Hawpe then hit for Jonathan Herrera, and nearly hit an infield single but was thrown out at first on a close play. It was left up to Carlos Gonzalez, who laced a single into right field that scored Fowler. Jason Giambi came up next, and hit a single that went far enough into the right-centerfield gap to score Gonzalez all the way from first, which tied the game. Aaron Cook pinch-ran for Giambi, and Miguel Olivo hit his second single of the inning, which brought Cook to third. Then, Mr. Late Night himself put the finishing touches on the most epic of Rockies' comebacks.

Manny Corpas deserves a tremendous amount of credit as well, as he did a great job of making sure the Cardinals didn't continue to build on the lead that they established against Jeff Francis and Jhoulys Chacin. Corpas tossed two perfect innings after Francis gave up five runs on six hits in four innings and Chacin allowed four runs on five hits in three frames. 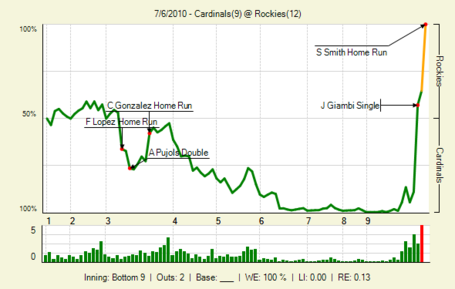 Comments of the night:

Olivo begins the most amazing comeback EVER!!!

Remember when this team couldn't have a come from behind game to save their lives?

Yeah. f that. This team is amazing.