Rockies 8, Cardinals 7: Chris Iannetta Is Dreamy When He Hits A Walk-off Home Run

Share All sharing options for: Rockies 8, Cardinals 7: Chris Iannetta Is Dreamy When He Hits A Walk-off Home Run

Ho hum. Another night, another come-from-behind victory for the Rockies. As Muzia commented in the game thread:

This isn't even fair.

Why do we get to root for the coolest team?

I wonder what it feels like to work in a real police department...
Denver.SBNation.com

Despite a poor outing by Aaron Cook (5 IP, 10 H, 5 R, 2 HR allowed), the offense kicked things into high gear once the fifth inning came. Ian Stewart, who also made a nice leaping catch for an out at one point, had a two-run double and Melvin Mora hit an RBI single in the fifth. Stewart wasn't finished for the night as he came back the next inning and drove in another run.

Then in the eighth, Brad Eldred (who went 3-for-4 with three runs scored) doubled and Ian Stewart walked. Dexter Fowler stepped to the plate, hitting lefty. Oh, hey, he just smashed a three-run home run to tie the game! End his switch-hitting if you dare.

And now it's the bottom of the ninth and I'm going to be Tony La Russa: "Ya know, there's no time like now to have a rookie make his major league debut in a tie game in the ninth inning." Time passes. "Good, good, 3-2 count. This is going is so wel--damn it!" Yep, Chris Iannetta hit the walk-off home run at that point. Check out the image The Lodo Magic Man posted, "Arrive. Swing my boomstick. Leave."

God, I love the Rockies! 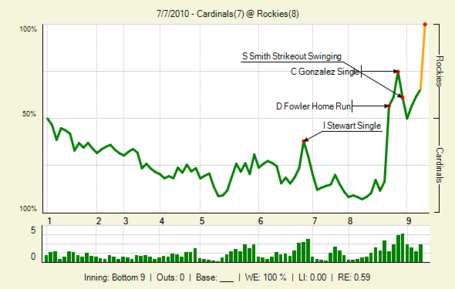