Santo Ubaldo Miracle #15: Jimenez again dominant in sweeping the Redbirds out of the Rockies

Share All sharing options for: Santo Ubaldo Miracle #15: Jimenez again dominant in sweeping the Redbirds out of the Rockies

The Rockies Ubaldo Jimenez improved his record to 15-1 before the All-Star break, and continues on a pace to set the Rockies all time wins mark and become the first National League pitcher in almost 40 years to challenge the 25 win plateau. Wins may be meaningless statistically for individuals, but his pitching returned to being marvelous. Of course for a team chasing playoff dreams, every win does matter and the Rockies three game sweep of the Cardinals puts them in excellent position heading into a weekend series against division leading San Diego.

Jimenez pitched eight innings, striking out six while walking two. There were a couple of loud outs, but also a couple of hitter BABIP friendly singles, and he had Cardinals hitters off balance the whole afternoon. Particularly impressive was a three pitch strikeout of Albert Pujols in the fourth inning a masterful fastball/slider/eye level fastball sequence called by Miguel Olivo, sandwiched by easy outs to Colby Rasmus and Matt Holliday. That inning to me seemed to set the tone for the remaining four, that the Cardinals simply wouldn't be able to touch Jimenez as long as he was in there.

Huston Street came on in the ninth and allowed one run on a double and somewhat lucky bloop single, but otherwise pitched effectively for the save.

Despite being the most roundly criticized lineup decision before the game, Jason Giambi had four hits and drove in two of the Rockies four runs.  Dexter Fowler and Brad Hawpe had two hits each to also further the cause of a the Rockies win.

After losing a series 3-1 to Colorado to open the homestand, San Francisco kept pace two games behind the Rockies by sweeping the Brewers. The two victories today give the NL West a combined 63-47 advantage over the Central division after 100 games thus far this season (although let's be frank in stating that SF and SD have more to do with that than Colorado thus far). 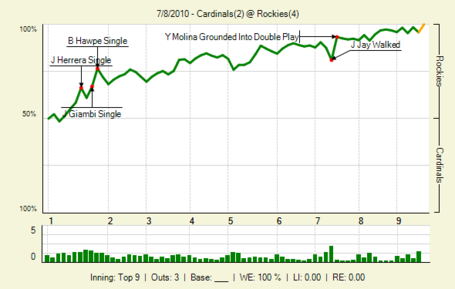 Really, as was the case last night, the game went to a 100% certainty for a win the moment yours truly walked into the stadium. My personal streak of watching Rockies winners in the regular season has reached 14.

The Rockies winning ways are bringing lurkers out of the woodwork, it appears. Welcome to Purple Row, all of you recent new posters! At least the good ones! :-)