I bet Rox Girl is kicking herself for going camping when she could have seen Ian Stewart hit two home runs and drive in a total of six runs tonight. Baseball doesn't get much better than what the Rockies have been doing lately. In this game, the Rockies scored early and late with two innings of five runs each.

Carlos Gonzalez started things off in the third inning with a two-run homer, which was followed by a Miguel Olivo RBI double. Ian Stewart made his presence first known in this game with a two-run homer to put the Rockies up 5-3. Before we get to the seventh inning, let's not forget that this was Jorge De La Rosa's first start in months for the Rockies. He had his ups and downs in 4 1/3 innings by allowing seven runs (five earned) and striking out six. Manny Corpas pitched an inning without much trouble (read: no runs allowed). Matt Belisle did allow a run in the top of the seventh, but who are we kidding? We knew the Rockies were going to come back.

The comeback in the bottom of the seventh goes like this: Dexter Fowler strikes out for the third time (he would strike out again an inning later). Back-to-back singles by Johnny Herrera and Carlos Gonzalez provide Jason Giambi with a chance to drive in some runs. A single to center scores Herrera and moves CarGo over to third. Miguel Olivo walks to load the bases, but Brad Hawpe strikes out for the second out of the inning. Ian Stewart takes two pitches for a ball and a strike. And then BLAM! A grand slam! Rockies lead 10-8.

Move ahead to the ninth, Huston Street handled the Padres quite well. Adrian Gonzalez struck out looking (AGone had some beef with the ump over the calls, and there was some merit to it) and Scott Hairston struck out swinging. A Nick Hundley fly out to center ended this contest. Rockies win! 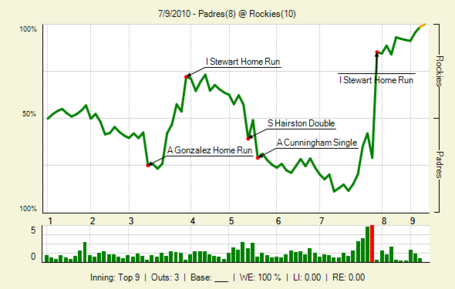