Share All sharing options for: Rockies 8, Cubs 7: Rockies Hold On For Sweep

After losing eight straight games, this team didn't seem capable of winning a game, let alone sweeping a series.  Yet here we are on August 1, with the Rockies cruising to a four game win streak.  The script has flipped - almost literally.

The sweep was barely in question early in the game, but a late inning surge from the Cubs fell just short.  Huston Street came in for some work (he had thrown 10 pitches on the homestand thus far) and had trouble locating his slider.  Marlon Byrd chased home two runs with a triple, and Alfonso Soriano crushed a sac fly to right center.  On the play, Dexter Fowler crashed into the wall.  He was taken out of the game and seemed to be favoring his ribs.  A DL stint seems likely at this point.  Street struck out Jeff Baker to just hold onto the win.

Jorge de la Rosa escaped from a two-out bases loaded jam (set up by a single, error and infield hit) in the first, an the Rockies quickly put their collective foot on the throats of the Cubs.

After a walk, single and ground rule double by Troy Tulowizki (playing in his 500th career game), Carlos Silva left the game with an undisclosed illness.  That mean the Cubs bullpen, whom the Rockies embarrassed Friday, would have to get 26 outs for the Cubs to escape with a win.  It wouldn't happen.

A four run second, highlighted by a Jonathan Herrera two-run single, gave the Rockies a 6-1 lead.  Two more runs crossed the plate in the fifth on RBI singles from Dexter Fowler and Ian Stewart.

Jorge de la Rosa was very good for his third straight start, something that should not go unnoticed in Colorado, or elsewhere.  He struck out five and was charged with three runs over 6.2 IP.  One scored while Manuel Corpas was on the mound, part of a two run seventh.  He added two singles and a sac bunt for a perfect day at the plate.

Every player reached base, while the only two with two hits were Fowler and de la Rosa.  Whodathunkit.

Also - Cubs fans didn't get to see one win at Coors Field this weekend.  That's the way it is supposed to be.  The Rockies have now ensured going five days without a loss to follow a nine day winless streak. 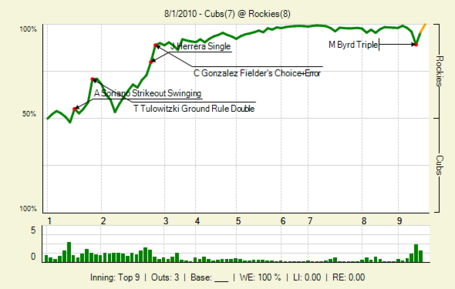