The baseball gods frowned on Ubaldo Jimenez and the Colorado Rockies tonight, as they could not get on the board and ultimately lost 1-0 to the previously struggling Mike Pelfrey and the New York Mets.

Jimenez, who has been bailed out of several potential losses this season, was tagged with a loss that he didn't deserve. He went seven innings and allowed a run on four hits while striking out eight. He did walk four batters, but two were intentional. Ubaldo now sits at 17-3 with a 2.55 ERA.

The Rockies' offense suffered a little bit of bad luck combined with a little bit of ineptitude in their latest loss to the Mets in New York. Several balls were hit at or near the warning track (including a couple by Carlos Gonzalez), but the cavernous Citi Field rendered them harmless. Plus, the Rockies only struck out five times, which is a lot less than one would expect to see when they get shut out. In addition, the red-hot Gonzalez hit the ball very hard in three of his four at-bats, but came away with only one hit . It was one of just four for the Rockies on the evening.

Joe Beimel and Rafael Betancourt combined for a scoreless inning of relief, as Beimel retired the first two batters of the eighth inning before walking Ike Davis, who had struck out in his previous three at-bats - all against Jimenez, before Betancourt entered and struck out the only batter he faced in Jeff Francoeur. That set the stage for the Rox to attempt a rally against Francisco Rodriguez in the ninth, but even with their best hitters at the plate (Gonzalez, Troy Tulowitzki, and Brad Hawpe), they still couldn't get on the board as they were set down in order by the Mets' closer. 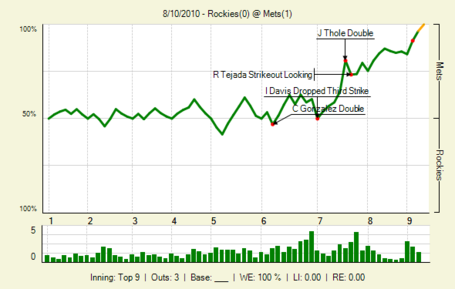