Rockies make yet another pitcher look like Johan Santana, lose 4-0 to Mets.

Share All sharing options for: Rockies make yet another pitcher look like Johan Santana, lose 4-0 to Mets.

The good news? The Rockies young core provided their entire offense today off of the Mets Johan Santana. The bad news? The entirety of that offense amounted to just three singles (one each by Carlos Gonzalez, Troy Tulowitzki and Ian Stewart) and two walks (both by Dexter Fowler). Typically that won't cut it at as far as the "scoring runs" objective goes. Subsequently, and this is strange but true, this lack of run scoring will also result in failure in the "winning" objective.

Jason Hammel sandwiched five goose-egg innings in between the two runs he allowed in both the first and seventh innings. Overall he wasn't his most effective, and certainly not up to Santana's performance, but also not nearly the contributor to the L column that the Rockies offense was this afternoon.

I guess the other good thing about this loss was that at least they made it quick. No long drawn out agony here as the game finished in about two hours. 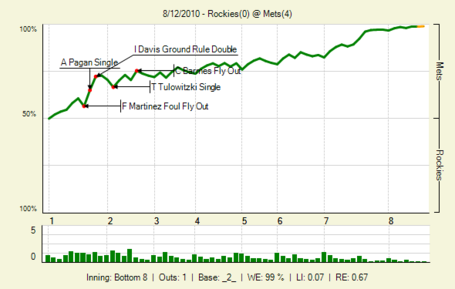