A game that started out like most of those on their recent road trip, solid but ultimately vulnerable starting pitching not being supported by the team's offense, was launched quickly into reverse with a three run Troy Tulowitzki home run in the bottom of the eight inning Friday night, as the Colorado Rockies stung the Milwaukee Brewers five to four. The Rockies rally started with a walk by Todd Helton and then was quickly followed by a Carlos Gonzalez double to set up Tulo's dramatic game-winning HR.

Gonzalez also doubled in the Rockies first run to give the team a one to nothing lead in the bottom of the third inning, but the Rockies offense couldn't muster anything else off of Brewers starter Yovani Gallardo until the seventh inning.

His counterpart on the Rockies mound, Jorge De La Rosa, started fairly well, but had to escape a two on zero out jam in the third and another milder threat in the fifth before finally letting the heart of the Brewers order get through on him the third time through the lineup in the sixth inning. Milwaukee took a three to one lead, and added one more run in the seventh off of Matt Belisle.

Ryan Spilborghs answered by knocking in the Rockies second run in the bottom of half of that inning, and Taylor Buchholz held ground by pitching a scoreless eighth to set up Tulowitzki's dramatics. Huston Street came on to pitch an efficient ninth for the save. 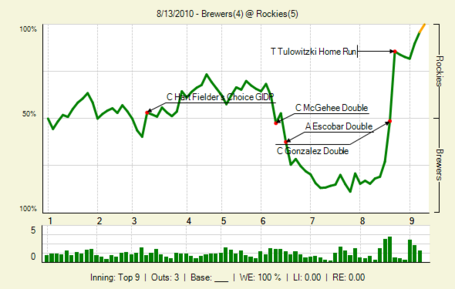