Rockies Lose in Extras 5-4 to Brewers

Share All sharing options for: Rockies Lose in Extras 5-4 to Brewers

At a time when losses (especially home losses to sub .500 clubs) can ill be afforded by the Rockies, Colorado was outhit by ten and lost in extras.

Despite the hit disparity (including 5 XBHs for Milwaukee), Colorado acquitted themselves pretty well in digging out of an early 3-0 hole to take a 4-3 lead. Todd Helton led the charge in a three run fourth with a solo shot his first homer at Coors this year. Helton also added a sac fly in the fifth to give Colorado a brief lead.

Esmil Rogers ran into trouble in the second inning with two out and a runner on second, allowing four straight singles to give the Brew Crew a 3-0 lead, but he settled down after that. In the top of the sixth with a one run lead Rogers bequested two runners to Randy Flores with two outs and the lefty allowed a single that drove in the tying run. From then on until the 10th, no scoring was to be had. Rogers' final line was 5.2 IP, 4 R on 9 H, 5 Ks.

There were baserunning blunders for both sides in the interim, as Rickie Weeks was thrown out stretching a leadoff double into a triple in the seventh while Troy Tulowitzki was gunned down at third trying to advance on a slightly wild pitch in the ninth when Colorado had two on and one out.

In any case, Huston Street (2-4) gave up a leadoff double to Ryan Braun in his second inning of relief, followed swiftly by an IBB to Prince Fielder and an RBI single by Casey McGehee. The Rockies didn't have any more Mile High Magic in them and they fell to 6-7 in extra inning games this year. John Axford pitched two innings of scoreless relief to record the win (7-1).

Whatever playoff aspirations the Rockies still have are fading quickly with each loss. On the bright side, the unofficial Purple Row brewery tour this afternoon was pretty great.

Tomorrow Ubaldo Jimenez takes the ball against Manny Parra for the Rockies to try and salvage a series victory. 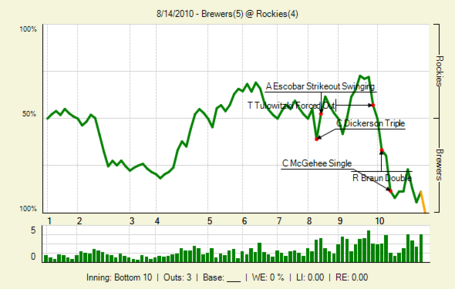