Ubaldo Jimenez broke the Rockies' franchise record for wins in a season today.  At least, he should have.  The Rockies led 5-3 in the ninth inning with one strike to go.  But a combination of Huston Street and the wind spoiled Jimenez' chance at history.

Huston Street came on in the ninth to protect a 5-3 lead even though he threw 29 pitches yesterday and earned the save Friday.  Dexter Fowler bailed him out by pilfering a potential home run from Chris Dickerson, but Street allowed a two-out two-strike single, a walk and a hit batter.  That's when he got Corey Hart to popup to second base, giving Ubaldo Jimenez his 18th win.

BUT NO!  CLINT BARMES DROPPED THE POPUP!!!!!  In the most creative way to blow a late lead, Barmes appeared to lose the skied popup in the wind, allowing the ball to deflect off his glove.  Two runs scored and the game was tied.  In his post-game press conference, Jim Tracy directly attributed the error to the wind.  Rafael Betancourt cleaned up the mess to set the stage for a possible walk-off win.

The Rockies did indeed win the game, though the loss of a historic win is almost as big of a story.  Dexter Fowler doubled off Trevor Hoffman in the bottom of the ninth, and Troy Tulowitzki singled him home two batters later for the walk-off win.

After allowing one run on four hits in three consecutive starts, Ubaldo fought through periods of dominance and control issues.  He was hit hard at times, as the Brewers tied the Red Sox for a season-high 10 hits off the Rockies ace.  But the feast-or-famine Brewers' lineup treated Jimenez well when they didn't make contact.

Ubaldo struck out 10 (his second highest total of the season) and walked one for the fourth time in 2010.  Ubaldo struck out the side in the first (two with the bases loaded) and held the Brewers scoreless in seven of his eight innings.  He allowed four consecutive well-struck hits in the third for all of Milwaukee's three runs.

That left the Rockies in a 3-1 hole, but Manny Parra's presence on the mound was comforting.  An error by Parra allowed Jimenez to reach in the bottom of the third, and a Ryan Spilborghs double scored Ubaldo.  An RBI groundout from Carlos Gonzalez tied the game, while Ian Stewart and Troy Tulowitzki both hit solo home runs. 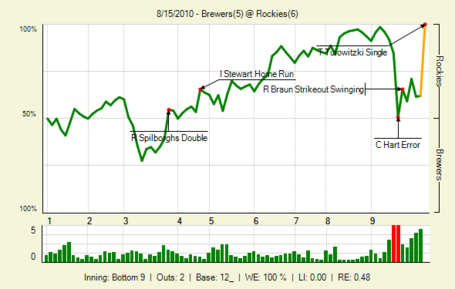