Clayton Kershaw stymied the Rockies for seven innings, as he kept them scoreless while striking out six on his way to win number three over Colorado this season. The Rockies had a couple of chances to do some damage with their best hitters coming to the plate, but Carlos Gonzalez struck out twice and popped out in key at-bats, while Troy Tulowitzki hit a couple of lazy fly balls to end legitimate scoring threats.

After Kershaw left and the bullpen took over, the Rox mounted one last rally attempt, as Gonzalez and Tulowitzki both got on base to start the eighth inning. However, Seth Smith struck out, Todd Helton flew out, and Ryan Spilborghs grounded out to end the inning, and really the game, as the previously-struggling Jonathan Broxton extended his streak of late-game ownership of the Rockies' bats.

Jhoulys Chacin showed some early flashes of dominance of his own, but ultimately was done in by poor control - he threw just 53 out of 100 pitches for strikes. He made several terrific pitches in tough spots in the early innings, but his ability to limit the damage went away quickly in the fifth, as he allowed four hits and two walks. The Dodgers did a terrific job of executing a hit-and-run that likely changed the inning, and the game. After Jamey Carroll led off with a walk, AJ Ellis put a groundball right where Tulowitzki would have been had he not bailed to cover second base. Instead of a potential double play, the Bums had runners on the corners with nobody out. More fun ensued from there.

Chacin finished the game having gone five innings and allowing five runs on five hits - again, most of which came in his last inning - and five walks. He struck out four.

On a positive note, Eric Young Jr. and Dexter Fowler were terrific at the top of the lineup for the Rockies on this night. Young was only retired once, as he hit two singles, walked twice, and stole two bases. Meanwhile, Fowler had a couple of hits and stole a base as well. They did a great job of setting the table, but the big bats just weren't able to get it done. 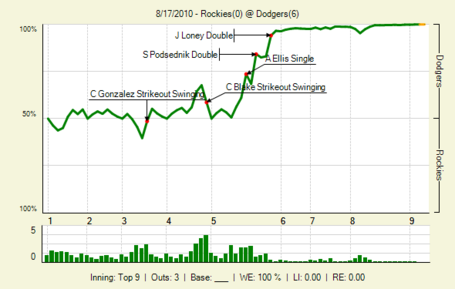