This isn't going to be a super-detailed wrap, but here are the highlights:

Melvin Mora scored what proved to be the winning run on the second wild pitch from Octavio Dotel in the tenth inning after walking and stealing second.

The same wildness afflicted the Rockies early, as Jason Hammel struggled with the command of his offspeed pitches early allowing Scott Podsednik to score the first Dodgers run on his second wild pitch of that inning. Hammel was able to effectively bounce back for an overall fine six inning start after that.

The Rockies first two runs scored in what's become unconventional fashion when the team is on the road. The Rockies scored their first run with a key, two out hit with runners in scoring position when Miguel Olivo doubled off Hiroki Kuroda and scored Seth Smith. The Rockies second run was manufactured and wound up scoring on a Carlos Gonzalez groundout.

Eric Young Jr. continued to impress in his call-up, going one for four and exhibiting some fine defensive skills at second base.

Matt Belisle, Joe Beimel, Raphael Betancourt and Huston Street shutout the Dodgers in four innings of relief. They weren't without some drama, the final out of the game was recorded on a play at the plate (albeit, not a very close one) as Street allowed a pair of baserunners.

Then of course there's this saddest aspect of the game, as referenced from Tracy Ringolsby's Twitter:

Brad Hawpe pinch-hit single in seventh in what will be last at-bat with Rocks. All things in place to release Hawp after game. 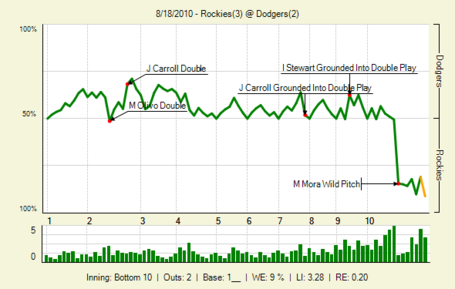