Matt Reynolds looked good in his major league debut, and Troy Tulowitzki's defense will probably get on some highlight reel of some sort, but other than that, there will be not much to recommend this game. The Rockies also had a decent effort by Jorge De La Rosa that was marred by a bad, two run mistake to Reed Johnson and salvaged somewhat by the defensive work of Tulo and others, but the utter absence of the Rockies offense against Ted Lilly made it all moot.

In a running theme for the season, the Rockies allowed another pitcher to hit a career high in strikeouts in a game, with 11 K's tonight. 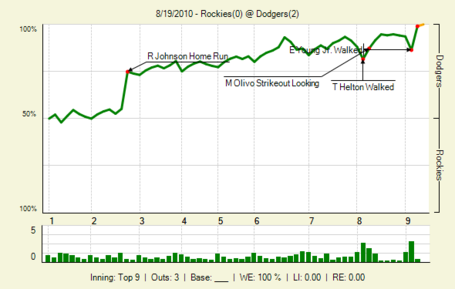