The Rockies August seesaw ride ended Friday night, but not in a good way, as the team's win one, lose one streak terminated at 16 games with a 4-3 loss to the Diamondbacks. The offense mustered just three runs on a dozen hits, and stranded multitudes of runners on their way to the loss. Huston Street blew another save, and clearly still doesn't seem to have his game back from his stint on the disabled list earlier this season. Joe Beimel

Starter Esmil Rogers was effective, composed and at times dominated the Snakes in six and a third innings. He allowed six hits and a walk and struck out six, frequently showing an ability to come up with a strikeout in critical moments, squashing Arizona rallies before they could get off the ground.

Having a pitcher that effective was a necessity, as the offense simply wasn't able to execute well with runners on base, and could never quite come up with a crushing blow. Troy Tulowitzki drove in two of the Rockies runs, Dexter Fowler scored twice and drove in the other. In addition, Eric Young Jr. proved a spark at the top of the order with three hits. Besides that trio, there were varying degrees of letdown in the performances of the other position players tonight, Ian Stewart perhaps delivering the biggest with a zero for five performance, but he was not the only player to not come through.

This inability to make the killshot finally reached a head in the ninth, when Huston Street allowed the first two batters he faced aboard, the eventual tying runs, before striking out Adam LaRoche and Mark Reynolds. Almost out of the woods, perhaps he let his guard down against Miguel Montero, who laced a two run double into left to tie the game. After another opportunity went up in smoke for the Rockies offense in the tenth, Joe Beimel allowed back to back hits to Justin Upton and Kelly Johnson, the latter a walk-off RBI double, to seal the Rockies fate. 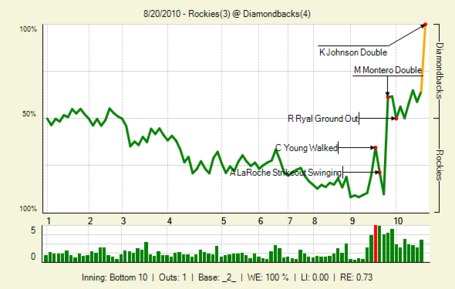