Share All sharing options for: Rockies Go Feebly Into The Night, Lose 3-1

The Colorado Rockies single season pitching wins record still stands at 17, as Ubaldo Jimenez (17-4) failed to get the win for his third straight start. Not that it was really his fault. Jimenez really only made one bad pitch, a hanging slider that Justin Upton ripped into the left field stands for a two run shot that put Arizona up 3-1 in the sixth. Upton was a one man wrecking crew for the Diamondbacks, as he also had a double and scored on a wild pitch in the fourth to provide Arizona's offense for the day.

Jimenez really did pitch well, only allowing three hits in his six innings of work, striking out three. The problem was that his offense wasn't up to the task of that mighty pitching juggernaut, Barry Enright (4-2) and the Arizona bullpen. Yikes. Colorado mustered only four hits on the day and got their run on a RBI groundout by Chris Iannetta that should have been a double play. I certainly expected a little more offensive output considering the opponent and the venue (one of the best hitting parks in baseball), but the Rockies just didn't have it.

What an awful offensive effort we saw tonight.

Graph: Not a pretty picture, boys and girls. 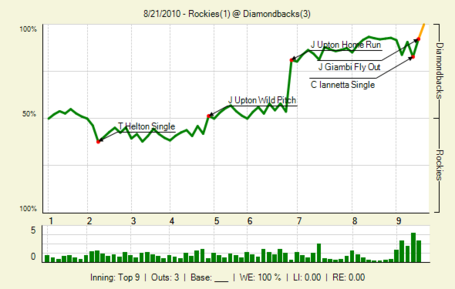 We Salute: The Rockies bullpen was good, Jimenez looked good against players not named Upton