Share All sharing options for: Rockies 1, Diamondbacks 0: Chacin Wins Battle of the Rookies

It is highly doubtful that many baseball fans outside of Arizona or Colorado paid much attention to this game, which is a shame.  There was an extraordinary battle of talented young pitchers on display at Chase Field today.

Dan Hudson had been masterful in his first four games with Arizona, going at least seven innings and allowing no more than three runs in all four starts.  It figured that the Rockies would need to give him his worst start with the Snakes to win.  Instead, they fed him his best.

The Rockies managed just four hits in seven innings against Hudson, striking out nine times.   Miguel Olivo singled in the fourth inning with Troy Tulowitzki on second base, but Tulo was thrown out trying to score with two outs and Jhoulys Chacin on deck.  It was one of just three Rockies' baserunners to reach second base off Hudson, who retired the final nine batters following the Olivo single.

Chacin retired 15 consecutive batters at one point, striking out nine in a career high 7.2 scoreless innings.  He went over 75 pitches without allowing a hit.  Nary a single Diamondback advanced past first base.  Only one Snake reached via walk.  His game score was a career high 81.  Career best game, no?

The Diamondbacks never threatened, but the closest the came was on a deep drive to the left-center gap.  Dexter Fowler made a catch eerily similar to the one that saved Ubaldo Jimenez' no-hitter in Atlanta, though he landed hard on his ribs.  After a five minute delay, he stayed in the game, which would become important later.

Although the Rockies failed to crack Dan Hudson, they did make him work enough to get to the Arizona bullpen.  25-year-old rookie Eric Young Jr. singled with one out in the eighth inning, then stole second base.  24-year-old sophomore Dexter Fowler then laced a singled up the middle for the winning run.

Huston Street retired Arizona in order in the ninth inning for the save.

In the Know Your Foe comments Friday, I noted that I was looking forward to these two intriguing young rookie pitchers locking horns.  The match-up did not disappoint. 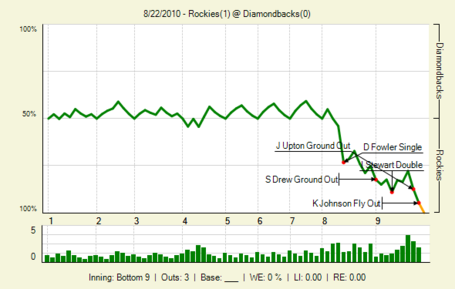 Fowler should also get some WPA love from Chacin for stealing an extra-base hit from Adam LaRoche.

If anyone is bored, I want to know the last time a player got a RISP hit on the winning side of a 1-0 win, yet still had the lowest WPA in the game for his team.