See, Huston Street can still close a game out without having any difficulties. And Todd Helton can still hit and come up big when it counts. I also think this victory has begun what you can call a winning streak. Sure, it's only at two games, but that's what starts a streak.

WPA Heroes
Todd Helton (.246) went 4-for-4 with two RBI and a run scored. His second RBI of the game was the go-ahead run in the bottom of the eighth. It was his first four-hit game since 16 July 2009.

Carlos Gonzalez  (.243) had two hits and drove in the first Rockies run in the third inning on a double.

Huston Street (.182) picked up his 11th save after striking out Jason Heyward to end the game. Street started the inning off by striking out Melky Cabrera.

WPA Losers
Rafael Betancourt (-0.109) picked up the win but also blew the game when an Alex Gonzalez RBI double tied the game in the eighth inning.

Miscellaneous
Jason Hammel pitched well for the first six innings, excepting that Martin Prado two-run homer in the fifth. Should he have come out for the seventh? He did allow that Rick Ankiel homer to start the seventh inning.

Ian Stewart hit a two-run homer in the fourth. He now has 18 homers on the season. 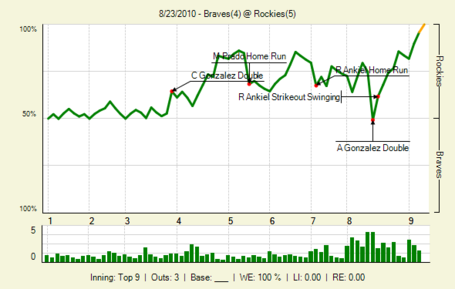