In what was his best start since the home opener vs. San Diego, Jorge De La Rosa kept the Braves in check for seven innings on his way to victory number five of 2010. The win also gave the Rockies their third straight and yet another home series victory over a playoff contender.

De La Rosa threw a modest 91 pitches in six innings, and was possibly taken out as a precautionary measure after showing some pain during the bottom half of the seventh before surrendering hits to Matt Diaz and Alex Gonzalez. Either way, he was terrific, allowing just two runs on six hits while striking out seven and maintaining a 12-to-2 GO/FO ratio. Matt Belisle allowed a hit in the eighth, but struck out a batter and induced a GIDP. Huston Street followed with a clean ninth inning that included a strikeout for his third consecutive save.

The Rox took a 2-0 lead in the first inning on a two-run homer by Carlos Gonzalez - his 26th - that plated Eric Young Jr. after he led off with a ground-rule double for the first of his three hits on the evening. Gonzalez had two hits, as did Dexter Fowler, who drove in two runs in the bottom of the eighth on a single after Clint Barmes struck out swinging but reached on a passed ball.

Seth Smith contributed to the scoring as well, as he (hopefully) slump-busted by obliterating a ball into the upper deck in the sixth inning for his 15th bomb of the season.

The Rockies now sit 5 games out of the Wildcard spot after Philadelphia's loss to Houston.

More stuff after the jump... 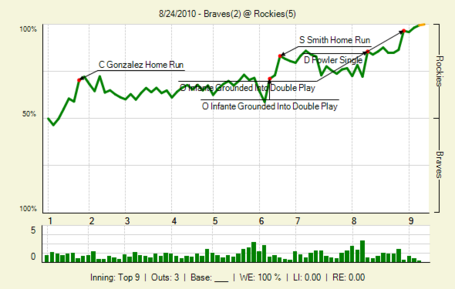