Share All sharing options for: Nobody will ever blame Jim Tracy of insider trading, manager fails to foresee Rockies eighth inning crash.

Okay, let me get this out there before anybody gets too far into a Jim Tracy bashfest. This loss wasn't completely on his shoulders. Once again, for what feels like the billionth time this season, there were large portions of the offense that were exposed by Dodgers pitching, and the two runs the Rockies scored might not have cut it regardless of which Rockies pitcher started the eighth inning.

What's more, Ubaldo Jimenez and Matt Belisle, as great as they've been for the Rockies in 2010, failed to execute in the eighth. If they stop the Dodgers, we don't question Tracy. Unfortunately they didn't. Ubaldo allowed the first three batters he faced in the eighth to reach base, and one to score, and Belisle allowed the rest in plus two more on a Casey Blake grand slam, and the Rockies wound up losing 6-2.

Todd Helton hit an opposite field home run off Dodgers starter Clayton Kershaw in the second for the Rockies first run. Carlos Gonzalez doubled and was driven home by a Melvin Mora single for the other run in the eighth. Samuel Deduno made his major league debut and recorded the last two outs of the ninth inning after allowing one inherited runner (from Franklin Morales) to score.

Let's win one tomorrow for Chacin the machine.

So I'm going to bed, but I have some idea of how this thread will look in the morning. A lot of hyperbole about the worst managerial decision in the history of everything costing us the game. The decision was terrible, but this stuff happens occasionally no matter who's on the bench. 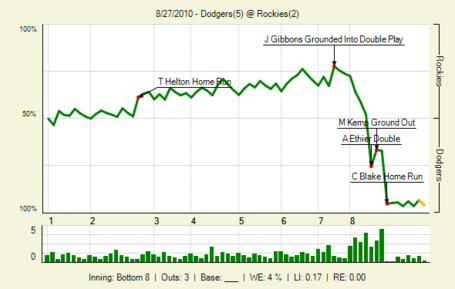