Share All sharing options for: Chacin Shuts Down Dodgers, Rockies Cruise to 5-3 Win

All the Rockies need to do to beat the Dodgers is to have their starter limit LA to one run over seven innings of work. Any starter not named Ubaldo Jimenez anyways.

After allowing a run on a second inning Casey Blake double, Jhoulys Chacin confounded LA hitters through seven strong innings of work. Chacin (7-9, 3.79) struck out seven men, only allowing four hits and four walks. Joe Beimel and Rafael Betancourt combined for a scoreless eighth, while Huston Street survived a two-run shot by Rod Barajas in the ninth to preserve the win for Colorado.

Offensively, it was Carlos Gonzalez and Todd Helton leading the way with the long ball. After run-scoring fourth inning singles by Troy Tulowitzki and Melvin Mora gave the Rockies the lead, Helton's fourth homer since coming off the DL (his sixth overall), a solo shot off Chad Billingsley in the sixth, made it 3-1. Gonzalez then stroked a two run shot (27) in the seventh to make it 5-1 and put the game away.

Another positive sign to take away from this overall positive game was that Colorado hitters only struck out once while walking six times. With all those runners clogging the bases, good things are likely to occur.

The win kept the Rockies at 4.5 GB of the Wild Card, as the Phillies beat the Padres. The Cardinals lost and the Giants were losing, so Colorado will probably be three back of San Francisco and 2.5 behind St. Louis. Where does that leave Colorado's playoff chances? Still hovering around 5%.

Tomorrow afternoon, Jason Hammel tries to get the Rockies their first series victory against LA in what seems like forever. He'll be facing Ted Lilly, who shut the Rockies down two weeks ago. 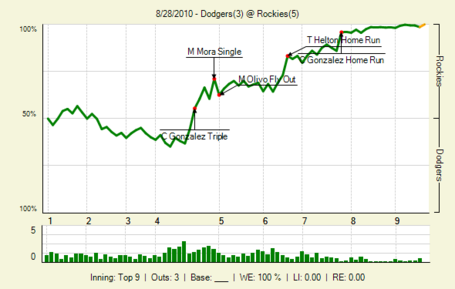