Share All sharing options for: Giants 10, Rockies 0: Ugh. Whatever.

Just one of those games...

Aaron Cook struggled out of the gate, mostly dealing with some control issues in getting his team into a 4-0 hole in the first inning. In the third inning, the Giants actually started smacking him around and after batting for himself in the bottom of the third, he exited trailing 5-0. The relief wasn't a whole lot better - particularly Taylor Buchholz and Manuel Corpas, who combined to allow the remaining five runs the Giants scored in the romp.

I should also mention that the Rockies only had three hits (one of which came off the bat of Buchholz) and struck out 13 times. Todd Helton went 1-for-3 with a walk in his first game back from injury.

There really isn't much of anything else to say about this one. Sweep it under the rug and go get 'em tomorrow. 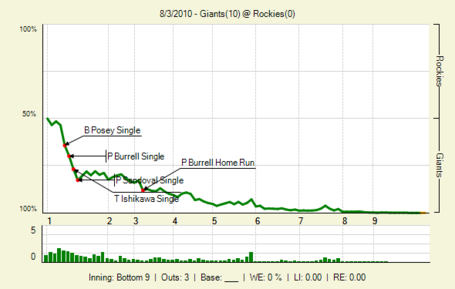 Ubaldo Jimenez pitches tomorrow. He'll face Madison Bumgarner, who has already lost to the Rockies once this season. As long as Travis Ishikawa doesn't come up with the bases loaded, I'm betting that Ubaldo will fare better than Cook did tonight.