The last part of the headline was a lot different (and cooler) when Melvin Mora hit an opposite-field homer to tie the game at 2 in the top of the eighth. However, Andres Torres changed things in a heartbeat with a homer of his own into the right field stands off of Matt Belisle in the bottom half of the inning to put the Giants back on top for good.

Esmil Rogers and Madison Bumgarner started the game, and both did a nice job. Rogers lasted six innings and allowed two runs (one on a first inning balk) on four hits and two walks while striking out three. Bumgarner, meanwhile, matched Rogers' six innings but only allowed one run, though he gave up five hits and three walks. It came down to the bullpens, where Matt Reynolds and Matt Belisle got Rogers and the Rox out of a precarious situation in the seventh. Ramon Ramirez held serve in the seventh as well, but Jeremy Affeldt blinked first in surrendering Mora's longball the next inning. Belisle couldn't carry his success from the previous inning into the eighth, though, as Torres hit a moonshot homerun that came a couple of pitchers after he whacked one (presumably) into McCovey Cove - but on the wrong side of the foul pole. After throwing the ball into the stands while attempting to get the next batter (Freddy Sanchez) out at first, Belisle was lifted in favor of Joe Beimel, who struck out Aubrey Huff, walked Cody Ross, and gave up a two-run double to Buster Posey which put the game out of reach.

The Rox squared up quite a few balls over the course of the evening, and all things considered, played well enough to win. Sometimes - as the Giants can certainly attest - it's just not your night.

Good news: the Padres lost again, and Ubaldo is on the hill tomorrow. All will be well again if the Rockies can come out on top and leave San Francisco with another series victory. 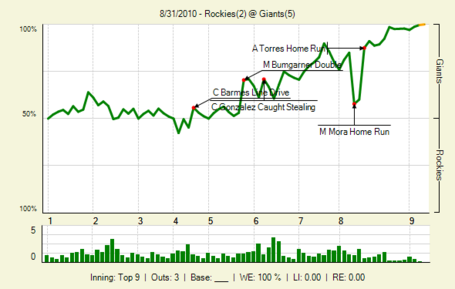