Ubaldo Jimenez now stands alongside Kevin Ritz (1996), Pedro Astacio (1999), and Jeff Francis (2007) with 17 victories in a single season, the franchise record. It's August 4th, so he has at least 10 more starts to break the record. Does anyone doubt that he'll reach 20 victories by the end of the season?

Jimenez struck out nine and allowed a run in seven innings. Yes, after Jimenez threw 118 pitches over seven innings, Jim Tracy decided to remove him from the game. Rafael Betancourt shut down the Giants in the top of the ninth with a 1-2-3 inning and three Ks.

Offensively, Carlos Gonazlez led the charge with his 22nd and 23rd homers of the season. The former was a two-run shot in the fifth and the latter came in the sixth off of Denny Bautista. Troy Tulowitzki followed CarGo's homer with one of his own, his 10th of the season. Ryan Spilborghs drove in two on a double in the second and was thrown out while attempting to advance to third base. These guys are pretty good, eh?

Time for the guys to head out to Pittsburgh. 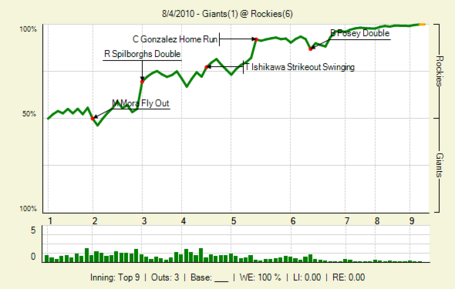