Rockies lose 5-1 to the Pirates because they're the losingest losers in the history of loserdom.

Share All sharing options for: Rockies lose 5-1 to the Pirates because they're the losingest losers in the history of loserdom.

It doesn't matter where the game's played at, losing to the Pirates is only something other bad baseball teams do. Because you can't handle the frickin' Pirates, Rockies, you have no business thinking about the playoffs this year. You should think about your golf swings, because that's what losing baseball teams do. Think about your golf swings and not baseball. You won't be playing baseball for much longer.

Seriously, go home, and think about what you just did. You lost to the Pirates, a team who can barely cobble together a AAAA pitching staff, and you've lost to them three times. Three. Yeah, whatever excuse you want, Rockies, but it's the friggin' Pirates.

There were plenty of goats tonight:

After striking out three times tonight and going zero for four, Miguel Olivo has just eight hits in 52 AB's since the All Star break for a .154 batting average. Carlos Gonzalez, batting third, also reverted to a road zombie and went hitless as did Jason Giambi batting fifth. Jeff Francis allowed a two run home run to Ronny Cedeno. He apparently didn't watch Wade LeBlanc's 7/25 start against Pittsburgh, as LeBlanc too was caught napping against the Pirates light hitting shortstop.

Troy Tulowitzki was credited with three hits (one was a bit of a gift) to lead what offense there was from the Rockies.

Not that it really matters if the Rockies are still going to be losers tomorrow, but at least the Giants are also some of history's losingest losers tonight, and the Phillies are also losing. 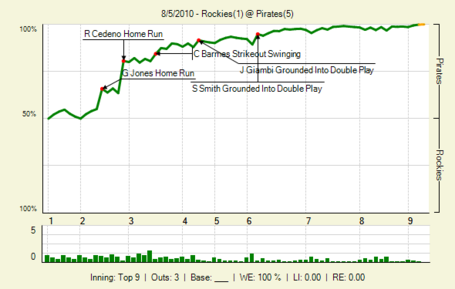