Share All sharing options for: Rockies make progress, hold on to defeat Pirates.

After failing to dispatch the worst team in the majors in three of their first four match-ups this season, the Rockies finally started to actually look like the better team on the field when the two teams played Friday night in Pittsburgh. The Rockies won six to three, outhitting Pittsburgh 15 to 6 along the way.

Clint Barmes, Troy Tulowitzki and Carlos Gonzalez each had three hits to lead the Rockies. The first of Gonzalez's three left the ballpark in the first inning for his 24th home run of the season to give the Rockies an early 1-0 lead. Barmes' first hit led to the Rockies second run as he came home on a Dexter Fowler double in the third. Fowler in turn was knocked in by Todd Helton, and the Rockies were looking good against Pirates starter Zach Duke with a three to nothing lead.

Unfortunately, the next few innings started to unfold in more typical Rockies road fashion, with a handful of baserunners, but a dire lack of clutch hitting and the offense stagnated. The Rockies had six hits in the fourth through sixth innings, but zero runs to show for them.

Meanwhile, Jason Hammel, who had been cruising along through five innings, reached the end of his effectiveness in the bottom of the sixth, surrendering an HBP, a single and a two out, three run home run to Pedro Alvarez. Note how the order of those events seems to result in a lot more bang for your buck than doing it in the reverse, as our team seems inclined on most nights.

Luckily, however, the Rockies did have a little punch left in them tonight, answering the Pirates rally with a run to regain the lead in the top of the seventh after Gonzalez singled, advanced on a wild pitch and scored on a Troy Tulowitzki RBI single.

Two more runs were scored in the ninth. A long fly by Dexter Fowler leading off was initially thought a home run, but instead ruled a triple. Gonzalez cashed him in with a sacrifice fly after a Helton walk. Tulowitzki singled, and then Jason Giambi came through with a pinch hit single as well to score Helton. Tulo made an awesome slide to avoid Alvarez's tag at third on the play albeit it came for naught as Seth Smith and Chris Iannetta both struck out to end the inning.

Huston Street pitched an effective ninth for the save, joining Matt Belisle and Joe Beimel for three scoreless innings from the bullpen.

With the Reds and Cardinals both winning their games earlier and the Giants currently leading, the Rockies may not make up much ground tonight in the Wild Card chase, but they will at least keep pace with the victory. 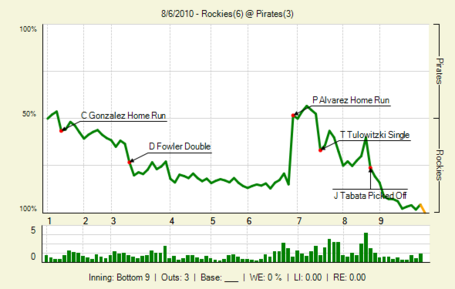