Well, I'd venture to say that this is the worst loss of the year so far.

As the ninth inning began, things looked bleak for Colorado. The team was down 5-2 and had shown little indication that they were capable of making it up--by and large the Rockies' offense had looked punchless against the Pirates' pitching staff, mustering only four hits entering the ninth. But two quick singles by Troy Tulowitzki and Brad Hawpe against Joel Hanrahan led me to believe inexplicably that something good was about to happen. And happen it did, as Ian Stewart crushed a fastball out to center for a game-tying three run shot (his 16th).

Then in the 10th after a Dexter Fowler infield single, Todd Helton hit a homerun that surprised just about everyone in the ballpark (his third of the year). It was Helton's 2,200th hit and it couldn't have come at a better time. Or so we thought.

Enter Huston Street with a two-run lead. Rockie-killer Andrew McCutcheon led off with an almost-HR double, then with two outs Street walked Garrett Jones. On the second pitch, Street threw a meatball and Pedro Alvarez crushed it into the right field stands for the walk-off, soul crushing 3R HR. ARGH. Exit Huston Street, a loser (2-3). Sean Gallagher took the win in relief (2-0).

Jorge De La Rosa labored through the first five innings but racked up zeros. Unfortunately De La Rosa couldn't hold Pittsburgh in the sixth nursing a 1-0 lead, as newly acquired catcher Chris Snyder knocked one off the left-field foul pole with two men on to give the Pirates a two run lead. After Brad Hawpe scored on a RBI groundout by Miguel Olivo to bring the Rockies within 3-2, Jones added a solo shot in the seventh to make it 4-2 and Pittsburgh added another on a bases-loaded strikeout/wild pitch in the eighth.

The extra-inning loss pushed the Rockies' record this season to 6-6 in those contests and was devastating in that Colorado HAS to beat the Pirates. Seriously. The Pirates are terrible.

Fortunately, the Giants and Padres lost so the Rockies are still 5.5 GB in the wild card and 6.5 back in the division.

Colorado will run out Esmil Rogers tomorrow against Paul Maholm to try to tie the series. The usual after the jump. 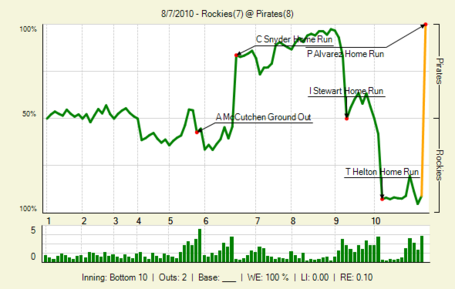