Carlos Gonzalez hit a two-run home run in the first inning as the line-up worked Maholm for 32 pitches in the opening frame.  Four runs crossed the plate in the second inning on an RBI single from Dexter Fowler and consecutive run scoring doubles from Clint Barmes, Carlos Gonzalez and Troy Tulowitzki.  All four hits came with two outs.

Esmil Rogers, originally signed as a shortstop, drove in a run with a double in the third and later scored.  He would add a double in the seventh, part of an excellent offensive day.  He put down a sacrifice bunt to lead to the team's third run and was robbed on a line drive up the middle by second baseman Neil Walker.

Rogers himself was shaky but efficient enough in six innings of work.  He struck out three and allowed four runs (three earned) on eight hits.  He had difficulty holding runners on base, as evidenced by an easy stolen base from Daniel McCutchen.  That is not enough to convince the Purple Brass to keep him in the rotation over Aaron Cook, but it was good enough on this day. 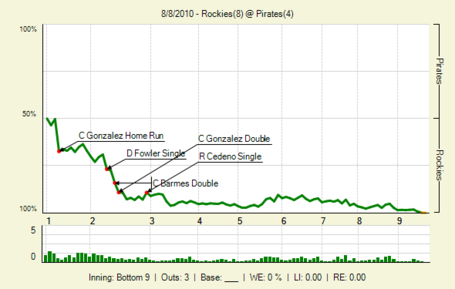