Who or what does Ubaldo Jimenez need to sacrifice to the baseball gods to get his 18th win? This loss isn't on him nor is it on Jim Tracy. The offense still can't hit on the road, except for that Coors Creation, Carlos Gonzalez. I hear he went 3-for-4 with a home run. Oh, and Miguel Olivo made a terrible throw that sailed into the outfield and gave the Giants their second run of the game.

As much as I'd like to bust out the #poseyed tag again, I think tonight the Rockies got #olivoed ... or just #jimtracyed

All except that last part.

And another one from Keith:

Oh well. There are still baseball games to be played. 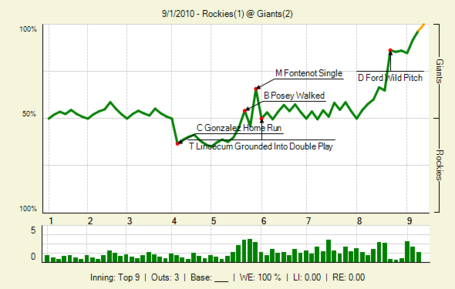